Humans doing difficult, repetitive tasks or those who need assistance with movement may soon get a helping hand - literally - thanks to robotic technology developed to serve astronauts in space.

Robonaut, a human-like robot designed by NASA and General Motors (GM), has been on the International Space Station since February 2011. Researchers have been testing the robot's ability to perform certain tasks to free up human crew time and energy.

"The idea is to help astronauts with dull, dangerous, or dirty tasks," said Ron Diftler, Ph.D., Robonaut project manager at NASA's Johnson Space Center in Houston. The ultimate goal is for the robot to perform tasks outside the station, saving the human crew the time and risk of some extravehicular activity, commonly known as spacewalks.

During its development, this astronaut helper sparked ideas for other uses of its technology. These additional uses weren't apparent when Robonaut was first envisioned but came about through various partnerships and observations along the way.

One inspiration generated the X1, an exoskeleton that could help astronauts remain healthy in space. On Earth, it could restore limb motion for those affected by paraplegia or stroke. To create X1, NASA partnered with the Florida Institute for Human and Machine Cognition (IHMC), which had already developed a lower-extremity exoskeleton to assist those with paraplegia.

One of two prototypes produced is at Johnson; the other is at IHMC. The device, worn over the legs with a harness over the back and around the shoulders, has motorized joints at the hips and the knees and passive joints for sidestepping, turning and pointing, and foot flexing. Someone in a wheelchair can easily put on the device, and its sensor technology provides useful data on its function.

In addition to assisting movement, the exoskeleton can also inhibit it, creating the potential for using it as a resistance exercise device for astronauts on long missions. Astronauts exercise, on average, two hours a day on the station to counter effects of microgravity on the human body, which include decreased bone density and muscular atrophy. Although existing exercise equipment has done an excellent job of maintaining crew health aboard the station, X1's smaller size and mass will be more suitable on deeper space missions.

X1 can also function as a dynamometer, a device that measures force or torque to quantify changes in muscle strength. Currently, an off-the-shelf dynamometer measures an astronaut's strength pre- and post-flight. The exoskeleton could be used for these assessments as well as to take measurements during a mission, allowing crew to immediately adapt exercise protocols in response to changes.

Testing of the device as a dynamometer for the knee and ankle has shown promising results. Next steps will likely involve further ground testing and, at some point, a technology demonstration flight experiment on the station.

Another Robonaut spin-off is RoboGlove, a glove with flexible tendons, a tendon drive system, and sensors that measure the grasping force applied by the wearer. The glove can also either assist or resist movement.

A major application of its assistive function could be for spacewalks. "One of the big issues is that extravehicular activity work requires enormous hand strength," said Lyndon Bridgwater, senior robotics engineer at Johnson. "Due to pressurization of the suit, it's like squeezing a balloon every time you move your hand. That causes extreme fatigue and even injury. We're looking at putting the hardware and actuator in the glove itself to provide muscle augmentation for the hand." Ground testing of this application is scheduled for next year.

Similar applications could help people who have loss or restriction in use of a hand through injury or stroke, and those who do difficult, repetitive tasks at work. For example, installation of car windows is a highly dexterous, fine motor task yet requires high hand strength to hold the heavy glass. Four copies of the glove in multiple sizes are currently in evaluation for these various uses. NASA and GM are looking for commercial partners to cost-effectively mass-produce the glove.

A third spin-off applies the technology to telemedicine. In tests with the Methodist Hospital in Houston, operators guided by a physician were able to use Robonaut to conduct ultrasound-guided venous access, or insertion of a needle into a vein. Someday, it may be possible to use the robot to conduct medical procedures on the space station under remote supervision of a doctor.

"The robot could stabilize an injured individual or do nursing level work, even on Earth," Diftler said. "That essentially transports a doctor's skill and presence to somewhere the doctor can't go or, in an emergency situation, where it would be dangerous for a person to go."

With all of these uses, the overarching idea is to design robots to assist people, not replace them, the researchers stress. In other words, to provide a helping hand for the human mission, in space or on Earth. 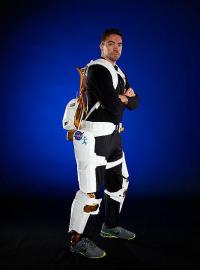