Unlike birds and amphibians, mammals can't recover lost hearing. In people, the cells of the inner ear responsible for detecting sound and transmitting those signals to the brain form during early stages of development and can't be replaced if lost due to illness, injury or aging.

Studying mice, scientists at Washington University School of Medicine in St. Louis have identified two signaling molecules that are required for the proper development of a part of the inner ear called the cochlea. Without both signals, the embryo does not produce enough of the cells that eventually make up the adult cochlea, resulting in a shortened cochlear duct and impaired hearing.

The study, available online in the journal eLife, contributes to the understanding of inner ear development, a first step toward the goal of being able to recover lost hearing.

"To eventually be able to restore hearing, we would like to be able to regenerate the sensory hair cells of the cochlea," said senior author David M. Ornitz, MD, PhD, the Alumni Endowed Professor of Developmental Biology. "If the inner ear in birds and fish is damaged, for example, cells in the inner ear are naturally turned back into progenitor cells that are capable of replacing the sensory cells. But mammals are more complex -- with a better sense of hearing over a wider range of sounds. However, it is thought that in exchange for better hearing, we have lost the ability to regenerate sensory hair cells."

In the new study, Ornitz and his colleagues showed that proper inner ear development in mice depends on the presence of two signaling molecules called FGF9 and FGF20. Normal signaling of these molecules in the inner ear turns on at about day 11 of the mouse embryo's typical 20-day development. Over the next two to three days, these two molecules direct the progenitor cells to multiply. By embryonic day 14, the progenitor cells stop multiplying and begin to differentiate to become functional adult sensory cells. At this point, the cellular population that comprises the adult ear is largely complete, according to this and other studies.

"In mammals, including mice and people, the number of sensory progenitor cells is fixed," said first author Sung-Ho Huh, PhD, instructor in developmental biology. "This number is determined by cell division or cell death in early stages of development. In mice, that's between about embryonic days 11 and 14. Once that developmental window is closed, the number of cells you have is all you get. There is no compensating for low numbers."

The hair cells of the inner ear pick up sound vibrations and transmit those signals to the brain. Hearing loss occurs when these hair cells are damaged, most often by loud noise, some types of medications and the aging process itself.

According to the new study, FGF9 and FGF20 send signals to their receptors, which are located in nearby cells that surround the developing sensory cells. Through signaling to these surrounding cells, FGF9 and FGF20 promote the growth of the sensory progenitor cells. This signaling activates a feedback loop that helps to direct proper development of the cochlea. According to Ornitz and Huh, future work is focused on identifying the molecules involved in the feedback mechanism.

"We have discovered that an FGF signal is instructive in forming the cochlea," Ornitz said. "These FGF signals tell the surrounding tissue to make a factor -- we don't know yet what that factor is -- but we know it regulates progenitor cell growth. And being able to grow progenitor cells, or instruct cells that can become progenitor cells to grow, is one key to restoring hearing."

Funder
the Hearing Health Foundation; and the National Institutes of Health, Action on Hearing Loss Foundation, the Office of Naval Research, the March of Dimes Foundation 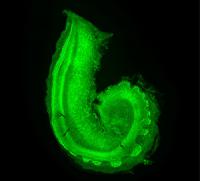