Heart muscle cells derived from stem cells show remarkable adaptability to their environment during and after spaceflight, according to a study publishing November 7 in the journal Stem Cell Reports. The researchers examined cell-level cardiac function and gene expression in human heart cells cultured aboard the International Space Station for 5.5 weeks. Exposure to microgravity altered the expression of thousands of genes, but largely normal patterns of gene expression reappeared within 10 days after returning to Earth.

"Our study is novel because it is the first to use human induced pluripotent stem cells to study the effects of spaceflight on human heart function," says senior study author Joseph C. Wu of Stanford University School of Medicine. "Microgravity is an environment that is not very well understood, in terms of its overall effect on the human body, and studies like this could help shed light on how the cells of the body behave in space, especially as the world embarks on more and longer space missions such as going to the moon and Mars."

Past studies have shown that spaceflight induces physiological changes in cardiac function, including reduced heart rate, lowered arterial pressure, and increased cardiac output. But to date, most cardiovascular microgravity physiology studies have been conducted either in non-human models or at tissue, organ, or systemic levels. Relatively little is known about the role of microgravity in influencing human cardiac function at the cellular level.

Beating hiPSC-CMs were then launched to the International Space Station aboard a SpaceX spacecraft as part of a commercial resupply service mission. Simultaneously, ground control hiPSC-CMs were cultured on Earth for comparison purposes.

Upon return to Earth, space-flown hiPSC-CMs showed normal structure and morphology. However, they did adapt by modifying their beating pattern and calcium recycling patterns.

In addition, the researchers performed RNA sequencing of hiPSC-CMs harvested at 4.5 weeks aboard the International Space Station, and 10 days after returning to Earth. These results showed that 2,635 genes were differentially expressed among flight, post-flight, and ground control samples. Most notably, gene pathways related to mitochondrial function were expressed more in space-flown hiPSC-CMs. A comparison of the samples revealed that hiPSC-CMs adopt a unique gene expression pattern during spaceflight, which reverts to one that is similar to groundside controls upon return to normal gravity.

"We're surprised about how quickly human heart muscle cells are able to adapt to the environment in which they are placed, including microgravity," Wu says. "These studies may provide insight into cellular mechanisms that could benefit astronaut health during long-duration spaceflight, or potentially lay the foundation for new insights into improving heart health on Earth."

According to Wu, limitations of the study include its short duration and the use of 2D cell culture. In future studies, the researchers plan to examine the effects of spaceflight and microgravity using more physiologically relevant hiPSC-derived 3D heart tissues with various cell types, including blood vessel cells. "We also plan to test different treatments on the human heart cells to determine if we can prevent some of the changes the heart cells undergo during spaceflight," Wu says.

Human heart cells are altered by spaceflight, but return to (mostly) normal on Earth 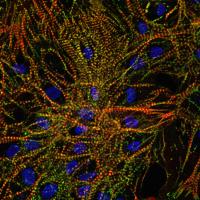