EUGENE, Ore. -- If you are familiar with the Donner party tragedy in the Sierra Nevada in the winter of 1846-1847, start with the eight-page final chapter of "An Archaeology of Desperation" for a concise summary of events and what researchers have and have not found. If not, read from the beginning, but don't expect to find the definitive word on cannibalism.

The 384-page book is different than the some 300 already existing histories, novels, films and children's books on the Donner fiasco. It is a mix of easy-to-read-and-digest social history and archaeological investigations. While sometimes heavy in archaeological descriptions, the book reads like a historical novel, detailing who the travelers were, their journey west, who survived and who didn't. For U.S. history buffs, "An Archaeology of Desperation: Exploring the Donner Party's Alder Creek Camp" (University of Oklahoma Press) pulls the storylines together.

At the book's heart are details of what researchers found at a hearth site during excavations in the summers of 2003 and 2004; they found 16,204 small bone fragments, from which just 105 were large enough to be linked to species -- none human -- on the Alder Creek site near Truckee, Calif.

This Alder Creek site was where the Donners built their shelters. Most of the other travelers camped about eight miles southwest at Truckee Lake, known today as Donner Lake. The latter site today includes the Donner Memorial State Park and Emigrant Trail Museum. Construction on a larger facility, the High Sierra Crossing Museum at Donner Memorial State Park, began this year.

"Our work has focused on the analysis of both historical and archaeological sources to understand how the emigrants survived in the mountains for four months," said co-editor Julie M. Schablitsky, senior research archaeologist at the University of Oregon's Museum of Natural and Cultural History, who led the project. "We have concluded that before resorting to cannibalism, they consumed their animals and supplemented their diet with wild game."

The bone fragments that researchers identified were from rodent, dog or other canine, deer, rabbit, horse, and oxen/cattle -- a lineup of remains that match survivors' accounts. Some bones appeared to have been boiled for long periods of time, an effort that was done to extract grease or trace nutrients. Several fragments were submitted for DNA testing, but none was recoverable. Intense burning of the bone and the moisture rich archaeological context likely caused the degradation of the DNA, researchers said.

Although Schablitsky and her two co-editors -- Shannon Novak of Syracuse University and Kelly J. Dixon of the University of Montana -- did not detect archaeological evidence of cannibalism, survivors had admitted to consuming the dead. Human bone exhibiting butcher marks, researchers noted, may be among the unidentified bone fragments they found. Or maybe such evidence is yet to be found, or, they wrote, a "radical conclusion" could be it did not occur.

The authors theorize that if the human flesh of dead companions was consumed, it would have happened in a brief time period -- a matter of days -- in late February 1847 before a second rescue party arrived to lead survivors to Sacramento.

"Rather than simply focusing on cannibalism -- did they or didn't they -- our inquiry approaches the event as a historically, socially, and contextually rich case that can be used to consider life and death during the winter entrapment, as well as the human condition in desperate situations," wrote Dixon and Novak in the book's extraordinarily vivid introduction.

In the chapters that follow, the disaster's unfolding is documented. In chapters 3-7, the authors' archaeological research is laid out, from their discovery of the hearth site to the types of materials that were found and the documentation that ties the site to the Donner party.

The remainder of the book looks at the tragedy's aftermath, including narratives told to anthropologists who interviewed Native Americans -- the Wa she shu, or Washoe -- who may have helped, or attempted, to feed the stranded travelers until their own winter supplies ran low. Tribal members, after the Donner party had been evacuated, entered the abandoned campsites and sought to cleanse away any spirits that might remain by scattering and burying left-behind belongings, according to handed-down tribal stories.

The book, Novak and Dixon write in their introduction, is where "myth and memory collide with scientific methods." Its interdisciplinary approach makes for a page-turner for anyone who has ever heard the story of the Donner party.

'An Archaeology of Desperation' details the Donner tragedy 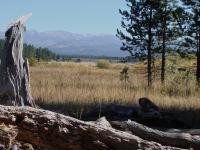