Their findings were published in Nature today.

It is estimated that 40 percent of carbon dioxide released into the atmosphere as the result of human activities - including the burning of fossil fuels - is absorbed by the ocean. There, the chemistry of seawater becomes more acidic and corrosive to coral reefs, shellfish, and other marine life. This process is known as 'ocean acidification'.

Coral reefs are particularly vulnerable to the ocean acidification process, because reef architecture is built by the accretion of calcium carbonate, called calcification, which becomes increasingly difficult as acid concentrations increase and the surrounding water's pH decreases.

Scientists predict that reefs could switch from carbonate calcification to dissolution within the century due to this acidification process.

In the first experiment to manipulate the chemistry of seawater in the ocean, a team of researchers brought the pH of a reef on One Tree Island closer to what it would have been in pre-industrial times, based on estimates of atmospheric carbon dioxide from that era. They then measured the reef's calcification in response to this pH increase. They found calcification rates under these manipulated pre-industrial conditions were higher than today.

The team was led by Rebecca Albright and Ken Caldeira from Stanford University and included University of Sydney PhD candidate Kennedy Wolfe, who was instrumental to the fieldwork undertaken to create these findings.

Previous studies have demonstrated large-scale declines in coral reefs over recent decades. Work from another team led by Professor Caldeira found rates of reef calcification were 40 percent lower in 2008 and 2009 than during the same season in 1975 and 1976. However, it has been hard to pinpoint exactly how much of the decline is due to acidification and how much is caused by other anthropogenic stressors like ocean warming, pollution, and over-fishing.

"Our work provides the first strong evidence from experiments on a natural ecosystem that ocean acidification is already causing reefs to grow more slowly than they did 100 years ago," Dr Albright said.

"Ocean acidification is already taking its toll on coral reef communities. This is no longer a fear for the future; it is the reality of today."

Increasing the alkalinity of ocean water around coral reefs has been proposed as a geoengineering measure to save shallow marine ecosystems. These results show this idea could be effective. However, the practicality of implementing such measures would be almost impossible at all but the smallest scales.

"The only real, lasting way to protect coral reefs is to make deep cuts in our carbon dioxide emissions," Professor Caldeira said.

"If we don't take action on this issue very rapidly, coral reefs--and everything that depends on them, including both wildlife and local communities--will not survive into the next century."

One Tree Island is a unique reef ecosystem that, at low tide, forms a ponded lagoon surrounded by a coral reef edge. "This habitat is ideal for experiments like these, allowing researchers to monitor reef response to changes in seawater conditions enclosed within the lagoon", Mr Wolfe said.

"We manipulated the current conditions of seawater by scooping 15,000 litres of water into a tank similar in shape to a large inflatable pool. We then pumped the water onto the reef, measuring the difference in response between present-day water and pre-industrial conditions."

The research was supported by the Carnegie Institution for Science and the Fund for Innovative Climate and Energy Research. 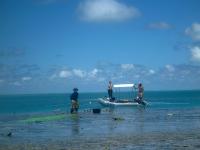 Researchers on One Tree Island