Here is the latest American Chemical Society (ACS) News Service Weekly press package (PressPac) with reports selected from 36 major peer-reviewed journals and Chemical & Engineering News. With more than 160,000 members, ACS is the world’s largest scientific society. Please cite the individual journal, or the American Chemical Society, as the source of this information.

Researchers in Australia report development of a new type of gold nanoparticle that destroys the parasite responsible for toxoplasmosis, a potentially serious disease acquired by handling the feces of infected cats or eating undercooked meat. Their so-called “golden bullet” could provide a safer, more effective alternative for treating the disease than conventional drug therapy, they say. The study is scheduled for the Dec. issue of ACS’ Nano Letters, a monthly journal.

Toxoplasma gondii, the parasite that causes the disease, infects more than 60 million people in the United States alone. Although most infected people have no symptoms, it can cause serious health problems in pregnant women and individuals such as AIDS patients or organ transplant recipients who have weakened immune systems.

In the new study, Michael Cortie and colleagues attached antibodies to the parasite onto gold nanorods that are activated by laser-light. A group of Toxoplasma-infected animal cells were isolated in cell culture dishes and subsequently exposed to these “golden bullets.” The cells were then exposed to laser-light, which heated up the “bullets” and destroyed the parasites. The treatment killed about 83 percent of the parasites containing the gold particles, the researchers say. They hope to develop a similar technique for killing the parasite in patients.

Solving another mystery of an amazing water walker
Langmuir

Walking on water may seem like a miracle to humans, but it is a ho-hum for the water strider and scientists who already solved the mystery of that amazing ability. Now researchers in Korea are reporting a long-sought explanation for the water strider’s baffling ability to leap onto a liquid surface without sinking. The study is scheduled for the Dec. 18 issue of ACS’ Langmuir, a bi-weekly journal.

In the new study, Ho-Young Kim and Duck-Gyu Lee note that scientists already have discovered the hydrophobic, or water-repellent, structure of the water strider’s legs and how they allowed the creatures to scoot along ponds and placid lakes. However, their ability to jump onto or “bounce” off liquid surfaces remained a lingering scientific mystery.

Kim and Lee solved it by dropping a highly water-repellent sphere onto the surface of water at different speeds, carefully tracking its motion with high-speed cameras. They found that the ball must be traveling within a narrow velocity range in order to bounce off the water’s surface. The sphere may sink if it goes too fast and won’t bounce back if too slow. “The highly improved ability of heavy hydrophobic solids to keep afloat on water even after impacting upon water with a high velocity appears to explain partially why water striders have superhydrophobic legs,” say the authors. “Application of our study can be extended to developing semi-aquatic robots that mimic such insects having the surprising mobility on water.”

Scientists are on the verge of decoding the special chemical language that bacteria use to “talk” to each other, British researchers report in a commentary article that appeared in the November issue of ACS Chemical Biology, a monthly journal. That achievement could lead to new treatments for antibiotic-resistant bacteria, including so-called superbugs that infect more than 90,000 people in the United States each year, they note.

David Spring, Martin Welch, and James T. Hodgkinson explain that researchers long have known that bacteria communicate with each other. Microbes release small molecules that enable millions of individuals in a population to coordinate their behavior. Disease-causing bacteria use this language to decide when to infect a person or other host. Decoding the structure and function of compounds involved in this elaborate signaling process, known as “quorum sensing,” could lead to new medicines to block the signals and prevent infections.

The report describes development of a group of powerful compounds, called N-acylated homoserine lactone (AHL) analogues that are effective against a broad-range of bacterial types, including those that cause diseases in humans. These compounds are “some of the most potent synthetic modulators of quorum sensing” identified to date, they say. In addition to showing promise for fighting antibiotic-resistant infections, the compounds may help prevent the growth of biofilms that foul medical implants and cause tooth decay and gum disease, the scientists note.

ARTICLE #3 FOR IMMEDIATE RELEASE
“Learning the Language of Bacteria”

Researchers in Michigan report new evidence that water levels in the Great Lakes, which are near record low levels, may be shrinking due to global warming. Their study, which examines water level data for Lakes Michigan and Huron over more than a century, is scheduled for the Dec. 15 issue of ACS’ Environmental Science & Technology, a semi-monthly journal.

In the new study, Craig Stow and colleagues point out that water levels in the Great Lakes, which supply drinking water to more than 40 million U.S. and Canadian residents, have fluctuated over thousands of years. But recent declines in water levels have raised concern because the declines are consistent with many climate change projections, they say.

To evaluate the factors behind this decline, the scientists examined water level data for Lakes Michigan and Huron from 1860 to 2006, including precipitation, evaporation and runoff data. The results reveal an underlying gradual decline in water levels since 1973. This underlying drop may be due to an increase in evaporation levels, they say.

“We cannot be certain that the present observed water level drop is caused by factors related to global climate change, or that it portends a long-term problem,” the study states. But the ongoing decline in water levels make it “prudent to include lower lake levels in future management planning,” the researchers note.

Better diets for fighting diabetes, obesity and heart disease may soon be only a finger-prick away. By analyzing the unique metabolic changes in an individual’s body, researchers hope to develop more personalized dietary guidelines for improving health, according to an article scheduled for the Dec. 10 issue of Chemical & Engineering News, ACS’ weekly newsmagazine.

In the article, C&EN Assistant Editor Carmen Drahl explains that not all people respond to diet in the same way: What makes some people healthy may in fact make others worse. Metabolomics, an emerging field whose practitioners study how foods affect metabolism, may provide new tools and data for customizing today’s one-size-fits-all dietary guidelines for an individual’s own body, the article notes. For example, a routine blood test that measures hundreds of compounds or more could detect shifts in a person’s metabolic balance to predict future health problems. Physicians then could develop a customized diet designed to work with that patient’s metabolism, while follow-up blood tests could allow caregivers to track improvements in a person’s health status, the article notes.

But the field is not quite ready for prime time. Academic and industry researchers alike are hard-at-work deciphering the complex science of how foods affect metabolism with the goal of building up a framework in which sound guidance for specifying personalized diet would become possible.

This story will be available on Dec. 10 at http://pubs.acs.org/cen/coverstory/85/8550cover.html

The American Chemical Society (ACS) Office of Communications has launched Bytesize Science, an educational, entertaining podcast for young listeners. Bytesize Science translates cutting-edge scientific discoveries from ACS’ 36 peer-reviewed journals into stories for young listeners about science, health, medicine, energy, food, and other topics. New installments of Bytesize Science are posted every Monday and available without charge. The archive includes items on environmental threats to killer whales, a scientific explanation for why some people love chocolate, some unlikely new uses for compact discs, and a hairy tale about “hairy roots.” The podcaster for Bytesize Science is Adam Dylewski, an ACS science writer and recent graduate of the University of Wisconsin-Madison with degrees in genetics and science communication.

The ACS Office of Communications is podcasting PressPac contents in order to make cutting-edge scientific discoveries from ACS journals available to a broad public audience at no charge. Science Elements includes selected content from ACS’ prestigious suite of 36 peer-reviewed scientific journals and Chemical & Engineering News, ACS’ weekly news magazine. Those journals, published by the world’s largest scientific society, contain about 30,000 scientific reports from scientists around the world each year. The reports include discoveries in medicine, health, nutrition, energy, the environment and other fields that span science’s horizons from astronomy to zoology. Podcaster for Science Elements is Steve Showalter, Ph.D., a chemist at the U. S. Department of Energy’s Sandia National Laboratories in Albuquerque, New Mexico, and ACS member.

The American Chemical Society has selected winners from schools around the nation for its 2007 poster contest for National Chemistry Week. That program, celebrating its 20th anniversary this year, has taught millions of students in grades K-12 and others about chemistry’s central role in everyday life. This year’s theme, “The Many Faces of Chemistry,” emphasized chemistry’s roles in improving public health, protecting the environment, providing innovative new products, and making life longer, healthier, and happier. For names, schools, and hometowns of winners and other details, please visit http://www.flickr.com/groups/ncwpostercontestwinners/ or contact m_bernstein@acs.org

The American Chemical Society’s workshop Cooks with Chemistry — The Elements of Chocolate [http://acselementsofchocolate.typepad.com/elements_of_chocolate/] provided reporters with a delectable assortment of new information on the world’s favorite treat. Held Oct. 11, 2007, at the Institute of Culinary Education in New York City and sponsored by the ACS Office of Communications, the chocolate workshop featured presentations from Harold McGee and Shirley Corriher, award-winning cookbook authors, and Sara Risch, the noted food and flavor chemist. With chocolate consumption nearing an annual peak as the holidays approach, we are providing content from this event to news media unable to attend the workshop. The material includes ACS journal articles about the chemistry of chocolate; advice for cooks who run into trouble with chocolate recipes; tips on how to successfully use “new” chocolates in old favorite recipes; and a fascinating comparison of the health benefits and flavor components of different kinds of chocolate. For interviews with the chocolate workshop participants or other information, please contact newsroom@acs.org.

A treasure trove of news sources, background material and story ideas is available from the ACS' latest National Meeting. Reporters can view press releases, search an archive with abstracts of 9,500 scientific presentations and 1,000 non-technical summaries of those presentations, and access other resources at http://portal.acs.org/portal/acs/corg/content?_nfpb=true&_pageLabel=PP_ARTICLEMAIN&node_id=222&content_id=CTP_006740&use_sec=true&sec_url_var=region1

The information in this press package is intended for your personal use in news gathering and reporting and should not be distributed to others. Anyone using advance ACS News Service Weekly Press Package information for stocks or securities dealing may be guilty of insider trading under the federal Securities Exchange Act of 1934. 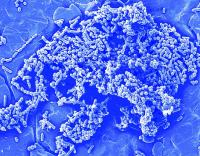