For around 50 million years, placodonts populated the flat coastal regions of the Tethys Ocean, in modern day Europe and China. The most distinctive feature of these dinosaurs was their teeth: The upper jaw had two rows of flattened teeth – one on the palate and one on the jawbone – while the lower jaw only had one set of teeth ideal for crushing shellfish and crustaceans.

The evolutionary origins of these placodonts remained unclear. However, a new find in a 246-million-year-old sediment layer now sheds light on the origin and phylogenetic development of the placodonts. As the Swiss and German team headed by Torsten Scheyer, a paleontologist at the University of Zurich, reveals the skull found in Winterswijk (Netherlands) is the earliest form of all known placodonts. The juvenile animal lived 246 million years ago. At around two centimeters in size, the skull is exceptionally well preserved and its characteristics set it apart from previous placodont discoveries.

The basal-most known placodonts to date have the group's trademark double row of crushing teeth in the upper jaw. The flattened teeth that give these animals their name only appear in more derived placodonts. "Unlike all the other placodonts discovered to date, the Winterswijk specimen has conical, pointed teeth instead of flattened or ball-shaped crushing ones," explains Scheyer, "which means the pointed teeth on the lower jaw slotted precisely into the gap between the palate and upper-jawbone teeth when biting."

The group's trademark double row of teeth in the upper jaw is proof that the new find is actually a placodont. According to the researchers, the teeth of Palatodonta bleekeri, the scientific name given to the Winterswijk specimen, were specialized in gripping and piercing soft prey. "The double row of teeth in the new find combined with its considerable age lead us to conclude that it is a very early placodont, from which the later forms developed," says Scheyer. The formation of crushing teeth and the specialization of a diet of shellfish and crustaceans thus developed later within placodont evolution.

The small Palatodonta bleekeri skull sheds new light on the ongoing debate on where the placodonts originated: Previous finds suggested origins in the shelf sea areas of either present-day China or Europe. Due to the considerable age of the new Dutch find and its basal form, however, the European origin of the placodonts is deemed confirmed. Scheyer and his colleagues are hoping for further exciting finds in Winterswijk to discover more about the evolution of the placodonts.

The placodonts are fellow Europeans 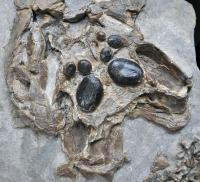 Skull of a Juvenile Placodont