Chironomids are also called non-biting midges or lake flies. Xiaolong Lin is a PhD candidate at the Norwegian University of Science and Technology's (NTNU) University Museum in Trondheim. He devotes almost all his time to investigating these flies.

"Lake flies are my life while I'm in Trondheim," says Lin.

His efforts have paid off with a new publication in Insect Systematics and Evolution.

The chironomid family (Chironomidae) is big. The non-biting midges can be found more or less around the world, including Antarctica, where the midge Belgica antarctica is the only native insect known there.

Norway has more than 600 described species, with a possible 15,000 species worldwide. Currently, 6000 different species have been described.

Lin has discovered around 30 new species, but is working to describe more.

"I like these midges because they don't bite," Lin says (half) jokingly.

Lin began studying chironomids when he started his master's degree in Tianjin, a big Chinese city of about 15 million near Beijing.

"Back then, I only wanted a master's degree to get a job," said Lin, but the midges quickly turned into something more than that.

Lin likes the hunt. He also likes to describe already known species in more detail, to find more features of the species and their relationships with other species. But he especially likes to discover entirely new species that haven't yet been described.

Lin recently defended his PhD dissertation at NTNU. Two of the eight new species he described in it are found in Norway.

Describing the appearance, or morphology, of a species is always a basic part of the research, but it's not enough to distinguish all the chironomid species. Many of them look alike to the naked eye.

"Luckily, I have good vision," quips Lin, who has spent just a few hours looking through microscopes.

He collects the material himself, from Norway, China and Germany, but also receives material from South America, Canada and Africa.

But to confirm a new species, he has to use DNA barcoding. With an insect sample in front of you, you can compare parts of the genome with DNA from known species in a quality-assured database.

Then you can see whether the species has already been identified, or at least if it is in the database.

The name "DNA-barcoding" comes from the similarity between species-specific DNA strings and the barcodes scanned at the store. Species have unique barcodes just like the items you add to your shopping cart.

As a sign of respect, Lin named one of the new species Tanytarsus heberti.

The species is named after Paul Hebert, an expert on biodiversity and the actual inventor of DNA barcoding. He was in Trondheim for the Starmus Science Festival in the summer of 2017. Lin has personally met Hebert several times.

"Since several of the new species were first discovered using DNA barcoding, it was natural to name one of them after Paul Hebert," said Lin. "An additional plus is that this species was found in Arctic Canada, where Hebert has spent a lot of time doing research."

The species is only 2.5 millimeters long. It can be found in the Churchill and Wapusk National Parks in the province of Manitoba. The species differs from its closest relatives by its bright colour, small details in the male genitalia and of course a distinctive DNA barcode.

Building a database in China

Access to DNA barcoding is one of the main reasons Lin chose to come to Norway. The technology is also used in China, but not for chironomids in the past.

"It's easy to find new species in this group," says Lin, but he doesn't mention the many long working hours that underlie the discoveries, even with the new technology.

Lin is also helping to build a DNA barcode reference library of Chinese chironomids. DNA barcodes exist for 300-400 of the 1,000 or more species found there so far.

"But we estimate that there are around 2000 chironomid species in China," Lin said.

The NTNU University Museum is pleased with the work Lin has done. Researcher Elisabeth Stur and Professor Torbjørn Ekrem were Lin's PhD supervisors and co-authors.

"Xiaolong Lin has done a really thorough and good survey of this group of chironomids. Not only does he describe new species in his dissertation, but he also analyses their evolutionary relationship and geographical distribution," Stur and Ekrem said of their protege.

They believe his work contributes significantly to the knowledge of a species-rich and important insect group in nature. 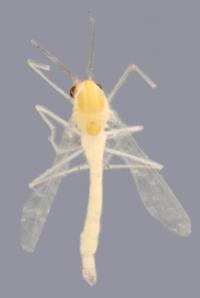