Solving one problem in order to gain access to another, which will enable you to address a third problem (and so on) in order to finally reach a goal – so-called sequential problem solving – is considered to be cognitively highly challenging as it requires the ability to spatially and mentally distance oneself from a desired goal.

In the study, ten untrained cockatoos faced a puzzle box showing a nut behind a transparent door closed by five different interlocking devices, each one jamming the next along the series and each required different motor actions in order to be opened. To retrieve the nut the birds had to remove first a pin, then a screw, then a bolt, then turn a wheel 90 degrees and then shift a latch sideways. Remarkably, one of them, the adult male Pipin, did it unassisted within less than 2 hours. Five other birds opened the sequence after watching a conspecific or facing the devices incrementally.

"Except for tool sets in chimpanzees, five steps problems, each requiring different action patters, without previous training as in Pipin has never been reported in animals" says Alice Auersperg who led the study at the Goffin Lab at the University of Vienna.

The fact that the birds were only rewarded with the nut once they had solved all five devices, and yet they worked determinedly to sort one obstacle after another, is remarkable. The animals seemed to progress as if they employed a "cognitive ratchet" process: once they discovered how to solve one lock they rarely had any difficulties with the same device again. This, the scientists argue, is, at least in Pipin's case, consistent with the birds having a representation of the goal they were after, thus being rewarded by the shortening of the chain of obstacles per se.

Cockatoos reacted both flexibly and sensitively to alterations

After the birds had accomplished the entire sequence, it was further investigated whether the birds simply ran through an inflexible sequence of learned behaviours or whether they understood the effect of the locks on the availability of the food reward. Alice Auersperg explains: "We confronted our six test subjects with so-called 'Transfer tasks' in which parts of the sequence were rendered non-functional. For example, we removed single locks inside the structure to see whether the birds would ignore the now ineffective parts above the gap in the sequence. Our subjects reacted flexibly and sensitively to alterations of the locks' sequencing and functionality. They omitted most irrelevant parts even if the entire constellation was scrambled".

"We cannot prove that the birds understand the physical structure of the problem as an adult human would, but we can infer that their behaviour is sensitive to such structure, and they do seem capable of organising their learning towards a distant goal", says co-author of the study, Alex Kacelnik from the University of Oxford. Last author Auguste von Bayern further elaborates: "The birds sudden and often errorless improvement indicates pronounced behavioural plasticity and practical memory. We believe that they are aided by species characteristics such as intense curiosity, haptic (tactile) exploration techniques and persistence: cockatoos explore surrounding objects with their bill, tongue and feet. A purely visual explorer may have never detected the movability of the locks". Alex Kacelnik emphasises what is not yet known: "It would be too easy to claim that the cockatoos understand the problem, but this claim will not be justified until we can reproduce the details of the animals' response to a large battery of novel physical problems".

Publication in Plos ONE 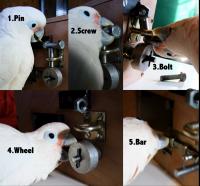