In the not-too-distant past, young people aspired to become lawyers and doctors. Now they yearn to achieve the celebrity of a Mark Zuckerberg or Oprah Winfrey — and these goals extend to adults as well. This has wreaked havoc with our self-image, says a Tel Aviv University psychologist, and undermined our sense of self-worth.

Extensive research from Dr. Carlo Strenger of Tel Aviv University's Department of Psychology demonstrates that people over the past ten years have been suffering from an increasing fear of their own "insignificance," something he first recognized in his own clinical practice. Noticing a surge of this fear in his patients, he began an interdisciplinary research project on the phenomenon.

His findings are presented in a new book, The Fear of Insignificance: Searching for Meaning in the Twenty-first Century (Palgrave Macmillan), which illustrates his decade-long investigation into an unprecedented increase in levels of anxiety and depression. It's the first study of its kind to address the issue on a large scale.

The evolution of "homo globalis": Hot or not?

The phenomenon of global angst in the last 10 years is well established by research findings, he notes, but it has never been analyzed and explained in its entirety. "To see the whole elephant and not just its parts," he says, "you need a wide-ranging interdisciplinary framework."

The research reported in his book integrates hundreds of research projects, from economic models to sociological studies and experimental existential psychology. Strenger concludes that the fear of insignificance is due global access — comparing ourselves with the most "significant" people around the world.

In the past being a lawyer or doctor was a very reputable profession, he explains. Today, even high achievers constantly fear that they are insignificant when they compare themselves to success stories promulgated by the print and electronic media, constantly afraid that their rating on a variety of scales may drop. "This creates highly unstable self-esteem and an unstable society," he says.

In his book, Strenger also attacks new pop-spiritualism that promises instant change and instant relief. Instead of solving an existential unease, such resources just create ever growing disappointment. The cheap-fix guru books for instant spirituality that line airport shelves do not provide any long-term solutions, he says.

The cure? Dump the junk and look inside

Strenger counsels that people stop measuring their achievement through cultural fantasies of riches and celebrity, which reflect a media craze for ranking and rating people and cannot lead to fulfillment. The remedy is a process that he calls "active self-acceptance" through a sustained quest for self-knowledge as part of our process of maturation. The fear of insignificance can only be overcome through strong individual and cultural identity over and above measurable achievement.

He believes that people need to invest as much time in developing their worldviews as their careers. "Stable meaning cannot be found in cheap paperbacks. The media are feeding people spiritual junk food. People should invest time and thought to their worldviews and self-understanding in the same way they invest in medical studies and law school," Strenger advises.

A liberal education is a good way to start, but the process must continue through a lifetime. To live a fulfilling life, we need to engage in a life-long process of learning and evolving, he concludes.

American Friends of Tel Aviv University (www.aftau.org) supports Israel's leading, most comprehensive and most sought-after center of higher learning. Independently ranked 94th among the world's top universities for the impact of its research, TAU's innovations and discoveries are cited more often by the global scientific community than all but 10 other universities.

Internationally recognized for the scope and groundbreaking nature of its research and scholarship, Tel Aviv University consistently produces work with profound implications for the future.

Overcoming the 'fear of insignificance' 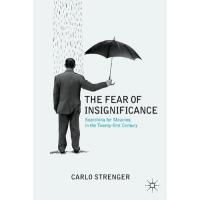