Two Penn State University researchers have carried out one of the first-ever analyses of the effects of global warming on endangered primates. This innovative work by Graduate Student Ruscena Wiederholt and Associate Professor of Biology Eric Post examined how El Niño warming affected the abundance of four New World monkeys over decades. The research will be published on 28 October 2009 in the Royal Society journal Biology Letters, a fast-track journal of the Royal Society of London.

Wiederholt and Post decided to concentrate on the way the oscillating weather patterns directly and indirectly influence plants and animals in the tropics. Until the research by Wiederholt and Post, this intricate network of interacting factors had rarely been analyzed as a single system. "We know very little about how climate change and global warming are affecting primate species," explains Wiederholt. "Up to one third of primates species are threatened with extinction, so it is really crucial to understand how these changes in climate may be affecting their populations."

The scientists focused on the large-bodied monkeys of South America, which are highly threatened. Choosing one species from each of the four genera of Atelines, Wiederholt and Post examined abundance trends and dynamics in populations of the muriqui (Brachyteles hypoxanthus, formerly B. arachnoides) of Brazil, the woolly monkey (Lagothrix lagotricha) in Colombia, Geoffroy's spider monkey (Ateles geoffroyi), which was studied on Barro Colorado Island in Panama, and the red howler monkey (Alouatta seniculus) in Venezuela.

For each species, long-term research projects carried out by other teams over decades have documented the abundance and feeding patterns of these primates. By studying the different species, Wiederholt and Post hoped to highlight the importance of the response to changing climate conditions of the trees that provide the dietary resources for the monkeys. All the species live in social groups and spend most of their time in the trees of tropical forests, using their limbs and prehensile tails to move around or to suspend themselves from branches. The monkeys differ in the proportions of fruit, flowers, and leaves in their diets. Woolly monkeys and spider monkeys predominantly eat fruit, howler monkeys specialize in leaf-eating, and muriquis also eat leaves but consume more fruit than howlers. "Long-term studies like those we derived data from are incredibly valuable for illuminating effects of global warming," Post said. "Unfortunately for endangered species, such studies also are incredibly rare. We hope our results bring attention to the importance of maintaining long-term monitoring efforts."

The team hypothesized that the trees' response to the warming events might provide a crucial link between changes in climate and monkey abundance. To test their hypothesis, Wiederholt and Post needed to compare information on the monkey populations with data on fluctuations in food resources such as leaves, seeds, and fruits. Then, using statistical models, they investigated how food and abundance information related to annual temperature and rainfall information.

Detailed ecological information was not available on each of the forests in which the target species live, so the team used information from Barro Colorado Island -- a lowland, moist, tropical forest where Geoffroy's spider monkey was studied -- as a general indicator of what happened over time in each of the habitats. From Barro Colorado, the scientists knew the number of tree species that were fruiting and flowering each month during the years between 1987 and 2004. They also looked at the annual values of flower and seed production for 44 specific tree species with seeds that are spread by mammals.

To examine these factors on a regional and local scale, Wiederholt and Post used information on mean annual temperature, rainfall, and the length of the wet and dry seasons for the years between 1960 and 1990 in Venezuela, Brazil, Barro Colorado Island, and Colombiaavailable. They obtained these data from the Smithsonian Tropical Research Institute and from the Center for Climatic Research at the University of Delaware. "We expected to find a strong relationship between the large-scale climate and the population dynamics of these species," explains Wiederholt. "We also wanted to tease out which measures of vegetation-response to climatic conditions were most influential."

The scientists obtained large-scale climate data from the southern oscillation index (SOI), the El Niño-Southern Oscillation indices (ENSO3, 34, 4, and 12), and the Southern Hemisphere temperature-anomaly index, which are available from the National Aeronautics and Space Administration and the National Oceanic and Atmospheric Administration. The Joint Institute for the Study of Atmosphere and Ocean provided a rainfall anomaly index. The El Niño and La Niña phases of the El Niño Southern Oscillation (ENSO -- often called simply "El Niño") are the cycles of warm/dry and cool/wet periods in oceanic and atmospheric temperatures in the tropical Pacific region. These cycles often are associated with disruptive events in to central and northern South America, such as floods, droughts, or disturbances in fishing or agriculture.

The results of the team's analyses were spectacular. All four monkey species showed drops in abundance relating to large-scale climate fluctuations. Even though the monkey populations were separated by large distances, the three fruit-eating species had synchronous responses to large-scale warming. During El Niño warming events, trees produced more fruit than usual. Then, during the subsequent La Niña cooling events, the trees produced much less fruit, resulting in a local scarcity or even famine.

Some ecologists have speculated that high production of fruit during El Niño events may have been triggered by the increase in solar radiation, despite lower-than-usual rainfall. However, high productivity during an El Niño event might also use up the stored reserves of the trees, which would have difficulty recovering during the subsequent La Niña events, when weather was wet, cloudy, and cool. This mechanism would explain why the fruit-eating monkeys showed a delayed response to the El Niño events after a lag of one or two years.

Howler monkeys also showed declines with warm and dry El Niño events, but their population fall was out of sync with that of the fruit-eating species. The mechanism is not yet clear, but Wiederholt has some ideas. She notes, "Primate researchers have seen elevated adult female mortality and lowered birthrates among red howlers in drought years. Since leaf flush often occurs at the start of the wet season, a prolonged dry season might delay the availability of this resource for the howlers and perhaps cause them nutritional stress."

Warmer temperatures also may cause leaves -- the howlers' primary food -- to mature faster, which would accelerate the leaves' acquisition of toxins and other chemical defenses against monkeys. The factor that the scientists found was most influenced by changes in climate was the monthly maximum number of tree species that were fruiting. Climate changes also were highly correlated with the monthly maximum number of species that were flowering and with annual seed production. The length of the dry season also was highly correlated with annual flower production. Thus, vegetation responses to climatic conditions substantially altered the food resources available to primates, which in turn influenced the decline or rise in monkey abundance.

Global warming already has produced a rise of 0.74 degrees over the last century, and an additional increase of 1.8 to 4 degrees Celsius is anticipated over the next century. "El Niño events are expected to increase in frequency with global warming," explains Post. "This study suggests that the consequences of such intensification of ENSO could be devastating for several species of New World monkeys."

The researchers say that now, more than ever, quantitative studies that delineate the complex ecological links between climate, vegetation, and animal survival are urgently needed.

This study was funded by Penn State's Graduate Fellowship Program in a grant to Ruscena Wiederholt.

IMAGES: Three high-resolution images related to this story are on the Web at: http://www.science.psu.edu/alert/Post10-2009.htm , which is where this press release will be posted after the embargo lifts. The caption and credit for the three images is provided below for your convenience in preparing your story in advance of the embargo date: "Critically endangered northern muriqui, Brachtyeles hypoxanthus, at the RPPN Feliciano Miguel Abdala, MG, Brazil. Photo by Carla B. Possamai, provided by K.B. Strier." 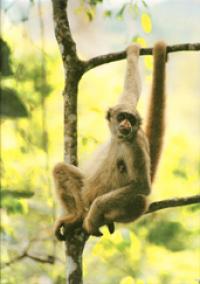 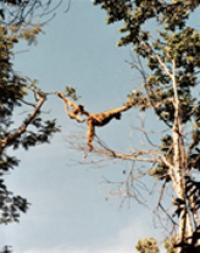