(COLUMBUS, Ohio) - If it's at the Olympic Games or at the neighborhood pool, diving is one of the fastest growing sports in this country*. Every day millions of people do it* and every four years during the Olympics, billions of people watch it. So it might surprise you that researchers are just now delving into the dangers of diving boards.

Chelsea Davis will tell you that competing at the highest levels of diving takes persistence. Day after day, dive after dive. No matter how hard she works to get it right even an experienced diver like Chelsea knows how quickly it can all go wrong. At the World Championships in 2005, Chelsea hit her head on the diving board and landed in the glare of the media.

"My nose was broken in about ten place, and I fractured my cheek bone and I sprained my neck," says Chelsea.

It was one terrifying example of something that happens every day, more often than many of us might think.

On average that's an injury an hour in the U.S., every hour of every day that most pools are open*. According to a study just published in the journal Pediatrics, kids between the ages of 10 and 14 are the most likely to get hurt diving,* and boys are taken to the hospital twice as often as girls. Experts say it's not the high risk, high dives that are to blame.

"More than 80% of the dive injuries were from a dive height of less than or equal to one meter. So, that is not the highest dive, that's not a platform dive, this is the lowest dive height available at the pool," says Lara McKenzie, PhD, Nationwide Children' Hospital.

Lara McKenzie is senior author of the study, the first of its kind in the U.S. Surprising, given the popularity of diving. There are now more than 20 thousand competitive divers under the age of 18 in this country* and millions of others who dive for fun. All of whom, McKenzie says, may want to learn more about the sport to lessen their chances of injury.

Experts say most people are hurt trying to do flips off of diving boards, especially back flips*. If your child wants to learn how to do them, try to enroll them in a program with a qualified instructor, and be sure they only use a diving board when a life guard is on duty.

**** (COLUMBUS, Ohio) – The thrill of flipping and jumping into water has become common practice among children and adolescents as they dive into more than eight million swimming pools across the United States. Competitive divers strive to gracefully enter the water without making a splash however these athletes, including the future Beijing 2008 Olympians, are not immune to the increase in diving-related injuries over the past two decades. Not only are competitive divers at risk for injury, but recreational divers are also being treated in emergency departments for diving-related injuries.

A new study conducted by researchers at the Center for Injury Research and Policy (CIRP) of The Research Institute at Nationwide Children's Hospital, found that the most common injuries while diving were to the head, neck and face.

Published in the August issue of Pediatrics, study findings revealed that an estimated 111,000 diving-related injuries to persons under the age of 19 were treated in emergency departments from 1990 through 2006. Lacerations and soft tissue injuries were the most common diagnoses, representing more than 58 percent of all injuries. Collision with the diving board or platform was the leading cause of injury – the likelihood of collision with the diving board dramatically increased when a diver attempted a flip, handstand or backward dive.

"There is a need for increased prevention efforts to lower the risks of diving-related injuries among children and adolescents," explained study co-author Lara McKenzie, PhD, MA, principal investigator in CIRP at Nationwide Children's Hospital. "The recent growth of the sport of diving, coupled with the increasing complexity and difficulty of dives, has resulted in a greater potential for both competitive and recreational diving-related injuries."

"Based on our findings, the largest age group of injured divers was 10- to 14 year-olds," said study co-author Gary Smith, MD, DrPH, director of the Center for Injury Research and Policy at Nationwide Children's Hospital, and an associate professor of pediatrics at The Ohio State University College of Medicine. "Although this group made up the largest number of injured divers, 10- to 19-years-olds were more at risk for an injury to the extremities. Boys were two times more likely to experience a head or neck injury or a fracture."

Recommended strategies for preventing diving-related injuries include educating divers about jumping into shallow water from the pool edge; placing visible depth indicators around the pool; constructing soft bottom pools; and removing obstacles from lakes, rivers and oceans. Also, the presence of a lifeguard or trainer, as well as teaching proper diving techniques could reduce the overall number of diving-related injuries. "Parents, pediatricians, coaches, lifeguards and trainers need to be aware of the types of injuries seen during recreational and competitive diving, as well as the risk factors," said McKenzie, also an assistant professor at The Ohio State University College of Medicine.

Data for the study were collected from the National Electronic Injury Surveillance System (NEISS), which is operated by the U.S. Consumer Product Safety Commission. The NEISS dataset provides information on consumer product-related and sports and recreation-related injuries treated in hospital emergency departments in the United States.

The Center for Injury Research and Policy (CIRP) of The Research Institute at Nationwide Children's Hospital works at the local to international levels to reduce death and disability due to injuries through research, education, advocacy and advances in clinical care. CIRP aims to improve the scientific understanding of the epidemiology, prevention, acute treatment, rehabilitation and biomechanics of injuries. CIRP educates health and other professionals, policy makers and the public regarding the importance of injuries, injury research and injury prevention. CIRP provides leadership in the development, implementation and scientific evaluation of public policy regarding control of injuries. Learn more about CIRP at http://www.injurycenter.org. 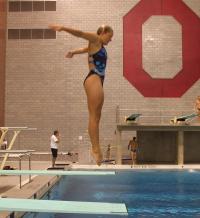 Competitive Diver Back After Serious Injuries