New research from the University of Washington and the University of Massachusetts - Amherst looks at how the most common cause of sneezing and sniffling in North America is likely to shift under climate change.

A recent study published in the open-access journal PLOS ONE finds that common ragweed will expand its range northward as the climate warms, reaching places including New York, Vermont, New Hampshire, and Maine, while retreating from some current hot spots.

"It was surprising that nobody had looked at ragweed distributions in the U.S.: As climate conditions are changing, where will it spread to in the future?" said corresponding author Michael Case, who did the work as a postdoctoral researcher in the UW School of Environmental and Forest Sciences.

Several studies of ragweed's future geographic distribution have been done in Europe, where people are concerned because this invasive species is expanding its range. This is the first study to consider future ragweed distribution in the United States.

Case's previous research looks at how climate change may influence the distribution of various species, mainly native trees in the Pacific Northwest. Co-lead author Kristina Stinson, an assistant professor of plant ecology at UMass Amherst, is an expert on ragweed, including mapping allergy hot spots in New England.

"One reason we chose to study ragweed is because of its human health implications. Ragweed pollen is the primary allergen culprit for hay fever symptoms in summer and fall in North

America, so it affects a lot of people," Stinson said.

For the new study, the two authors built a machine learning model using Maxent software that takes some 726 observations of common ragweed in the eastern U.S., drawn from an international biodiversity database, then combines those with climate information to identify conditions that allow the plant to thrive. Researchers next ran the model into the future using temperature and precipitation output from 13 global climate models under two different pathways for future greenhouse gas emissions.

The results show that roughly 35 years from now, ragweed is projected to expand northward into places where it has not been documented, including upstate New York, including the Albany area, New Hampshire, Maine and Vermont.

While that news may be ominous, knowing the plant is coming may help those communities prepare.

"Weed control boards, for example, might include ragweed on their list to keep an eye out and monitor for," Case said. "Historically they might not have been looking for ragweed, but our study suggests maybe they should start looking for it."

The study only covers the region east of the Mississippi River because that's where there were enough ragweed observations to run the model. The plant is commonly found in Illinois, Florida and the eastern seaboard from Washington, D.C. to Rhode Island. It is possible that ragweed would also expand its range westward or north into Canada, Case said, but those areas were outside the scope of the study.

The study also finds regions where ragweed is prevalent today but will decline substantially in the future, including the southern Appalachian Mountains, central Florida and northeastern Virginia. And knowing that, too, might be useful.

"As the climate becomes less suitable, there may be opportunities to try and displace ragweed. Maybe that is the silver lining -- that there are some opportunities for those communities to actually get some headway on mitigating or even eradicating this species," Case said.

Models show an overall surge in ragweed in the eastern U.S. by the 2050s followed by a slight overall contraction from the 2050s to the 2070s, as temperature and precipitation become more variable.

"It is kind of an interesting case study of climate change effects: It's not all bad, it's not all good," Case said.

"We don't have a lot of models like this that tell us where individual species may go under different scenarios," Stinson said. "Ecologists are working on doing this type of study for more species, but there are not always enough data points from around the world; individual species data are rare. But ragweed happens to be quite abundant, which made this study feasible."

The research was funded by the U.S. Environmental Protection Agency and the University of Massachusetts. Case is now with The Nature Conservancy. 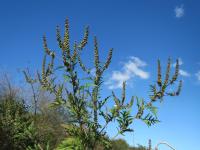 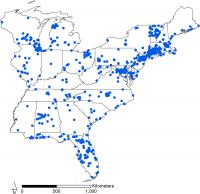