Rising sea levels caused by a warming climate threaten greater future storm damage to New York City, but the paths of stronger future storms may shift offshore, changing the coastal risk for the city, according to a team of climate scientists.

"If we cause large sea-level rise, that dominates future risks, but if we could prevent sea-level rise and just have the storm surge to worry about, our projections show little change in coastal risk from today during most years," said Michael E. Mann, distinguished professor of meteorology and atmospheric science and director of Penn State's Earth System Science Center. "While those storms that strike New York City might be bigger and stronger, there may be fewer of them as changing storm tracks increasingly steer the storms away from NYC and toward other regions."

Coastal damage increases if the sea level is higher before a storm, and if the extra surge caused by the storm is higher.

The researchers looked at the history and future of both sea level and storm surge, from preindustrial times through 2300, in models that had been run for the full period. The researchers focused on results from simulations with rapid carbon dioxide release, often referred to as "business-as-usual" simulations. They reported their results online today (Oct. 23) in the Proceedings of the National Academy of Sciences.

Future changes in sea level and storms would be smaller if actions were taken to slow climate change, such as the Paris Accord's goal of limiting warming to 3.6 degrees Fahrenheit. Sea level has been rising, and this is expected to continue as warming causes ocean water to expand and ice on land to melt and release water into the ocean. But, rapid change in the behavior of parts of the Antarctic ice sheet might cause much greater rise than is often included in coastal planning.

The researchers first calibrated their sea-level models to simulate the rates of historic sea-level rise. Then they ran simulations for the future, with and without results of a recent study that projects large future Antarctic ice sheet melt with business-as-usual increases in levels of greenhouse gases. Such large Antarctic melt implies large increases in sea level, globally and at New York City.

If this Antarctic instability occurs, the future risk to New York City is dominated by sea level rise. Then, according to Andra J. Gardner, postdoctoral fellow, Rutgers University, by 2100 the estimated 500-year flood height would be 17 feet, and by 2300 the 500-year flood height would be about 50 feet. A 500-year flood is one that has a 1 in 500 chance of occurring in any given year. Reducing warming enough to preserve the Antarctic ice thus would greatly reduce risk to New York City.

If sea-level rise remains small, then changes in storm surge are the most important concern for future coastal risk to New York City. In agreement with previous work, the models show that warmer future conditions allow stronger storms. But the models also show that the warming causes storm tracks to shift offshore and northward, away from New York City.

"If a shift occurs toward less common but possibly larger storms, it poses special challenges for coastal planners, and highlights the value of additional progress in understanding and projecting the tracks as well as the strength of these storms," said Mann.

The paper describes the general agreement among the models studied that storms will strengthen and shift offshore with warming, but identifies important differences that could be reduced with further research.

"Sea level is rising and higher sea level increases the damages from coastal storms," said Richard B. Alley, Evan Pugh Professor of Geosciences, Penn State. "Human decisions about energy will be important in determining how much the sea rises and thus how much damage we face, and accurate projections of storms will help in minimizing the risks."

The National Oceanic and Atmospheric Administration, the National Science Foundation, Community Foundation of New Jersey, and David and Arleen McGlade supported this work. 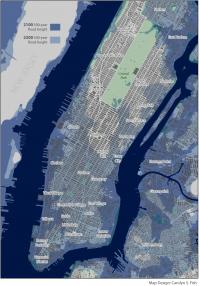