Under the background of global warming, major natural disasters are on the rise, causing serious economic losses and human casualties. Due to the special geographical environment, China has been seriously affected by meteorological disasters for a long time, especially drought and flood disasters. As a result, month-to-season-scale climate prediction with drought and flood forecasting as the focus has always been a major demand for national development. However, the accuracy of the existing climate prediction model is far from meeting the actual needs. The fundamental reason for the inaccuracy of climate prediction lies in the lack of basic theories of climate dynamics.

Guoxiong Wu, an academician of the Chinese Academy of Science and the famous Chinese climate dynamicist, had once paid attention to the progress of the 3P-DGAC. Prof. Guoxiong Wu commented: "3P-DGAC provides a feasible method for the study of the complex interactions between the mid-high latitude atmospheric circulation and the low latitude atmospheric circulation as well as between the horizontal circulation and the vertical circulation, which is an original and innovative research achievement with international level." 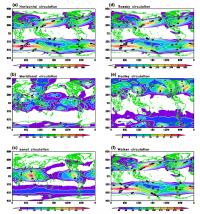