Reaching over 3.5 m in length, the bushmaster (belonging in the Lachesis genus) is the largest viper in the western hemisphere. Legend spread among both colonists and natives from the Amazon region and Central America has it that it sings. Finding these numerous unrelated reports quite puzzling, since it is well known that snakes cannot sing, scientists took to finally disentangle the myth.

When the researchers recently conducted fieldwork in Amazonian Ecuador and Peru, they revealed it was not the snake singing. The 'song' was indeed the call of large tree frogs that live in hollow trunks in the forest.

While local guides in both countries attributed the songs to the bushmaster, the amphibians were almost completely unknown. To their surprise, instead of finding a snake, the field teams found two species of frogs of the genus Tepuihyla. The results are published in the open access journal ZooKeys in a collaborative effort by scientists from Catholic University of Ecuador, the Peruvian Institute of Research of the Amazon, Ecuadorian Museum of Natural Sciences, and Colorado State University, USA.

One of the tree frogs is a new species, Tepuihyla shushupe. The word shushupe is used by native people to refer to the bushmaster. The calls are highly unusual for frogs because they are a loud chuckle resembling the song of a bird. It is still unknown why locals associate the calls of the two species with the bushmaster. 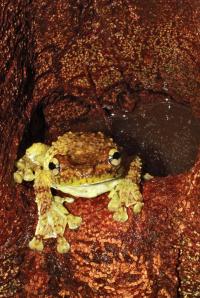 One of the Frog Species, Whose Calls Have Long been Mistaken for the 'Songs' of a Bushmaster Viper

Bushmaster Viper Long Thought by Both Colonists and Natives to Sing