Tracking migratory birds that carry tiny satellite transmitters in featherlight 'backpacks', can teach us a lot about change in the environment. It may also point at possibilities to avoid loss of biodiversity. That is an important message in the PhD-thesis that Ying Chi Chan, a PhD candidate of the University of Groningen, based at the Royal NIOZ (Netherlands Institute for Sea Research), defends on May 28th 2021. "Bar-tailed godwits with transmitters on their backs, directed us to an important area along the coast of the Yellow Sea at Dafeng-Dongtai-Rudong, where many birds roost and feed. Showing the importance of this area for migratory birds led to a halt of intended land-claim in the tidal zone of the Yellow Sea", Chan says.

Chan and colleagues followed red knots, great knots and bar-tailed godwits with satellite transmitters for three years. Moreover, after catching the birds and before fitting them with the transmitters, the team performed simple 'personality tests' on the great knots. That way, they were able to see whether an individual bird was of the 'explorative' type or of the more 'conservative' type. Chan: "We saw that these different personalities led to very different strategies for coping with change in their environment. When the availability of shells for these birds changed, the more explorative individuals were able to deal with this better than the conservative birds. The explorative individuals left areas with poor prey quality sooner, to look for better places to feed. They also arrived earlier in their breeding areas in the Eastern Russian Arctic and thus had better odds for successfully raising chicks. This was supported by the fact that they stayed longer in the breeding area. When knots lose their eggs or chicks, they usually leave the breeding area shortly after."

With their research, Chan and colleagues were the first to map the exact migration routes of great and red knots along the East Asian-Australasian Flyway. Previously, it was assumed that knots use only one or two stops on their way from the wintering grounds to the breeding area in the Arctic. Chan, however, discovered that the knots use multiple stopover sites in between. "Mapping the migration routes and the important feeding sites is crucial for understanding the ecology of these birds", Chan says. "It is also essential to support evidence-based conservation. For example, showing how bar-tailed godwits used a particular area in the Yellow Sea to fuel up, has led to its recognition as World Heritage site by the UN."

Having completed her work on waders, Chan will start working as a post-doc in Switzerland, doing research on the dispersal of red kites and little owls at the Swiss Ornithological institute in Sempach. 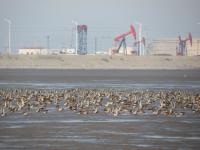 A flock of red knots at Nanpu, Bohai Bay, China