When it comes to data storage, density and durability have always moved in opposite directions – the greater the density the shorter the durability. For example, information carved in stone is not dense but can last thousands of years, whereas today's silicon memory chips can hold their information for only a few decades. Researchers with the U.S. Department of Energy's Lawrence Berkeley National Laboratory (Berkeley Lab) and the University of California (UC) Berkeley have smashed this tradition with a new memory storage medium that can pack thousands of times more data into one square inch of space than conventional chips and retain this data for more than a billion years!

"We've developed a new mechanism for digital memory storage that consists of a crystalline iron nanoparticle shuttle enclosed within the hollow of a multiwalled carbon nanotube," said physicist Alex Zettl who led this research. "Through this combination of nanomaterials and interactions, we've created a memory device that features both ultra-high density and ultra-long lifetimes, and that can be written to and read from using the conventional voltages already available in digital electronics."

Zettl, one of the world's foremost researchers into nanoscale systems and devices, holds joint appointments with Berkeley Lab's Materials Sciences Division (MSD) and the Physics Department at UC Berkeley, where he is the director of the Center of Integrated Nanomechanical Systems. He is the principal author of a paper that has been published on-line by Nano Letters entitled: "Nanoscale Reversible Mass Transport for Archival Memory." Co-authoring the paper with Zettl were Gavi Begtrup, Will Gannett and Tom Yuzvinsky, all members of his research group, plus Vincent Crespi, a theorist at Penn State University.

The ever-growing demand for digital storage of videos, images, music and text calls for storage media that pack increasingly more data onto chips that keep shrinking in size. However, this demand runs in sharp contrast to the history of data storage. Compare the stone carvings in the Egyptian temple of Karnak, which store approximately two bits of data per square inch but can still be read after nearly 4,000 years, to a modern DVD which can store 100 giga (billion) bits of data per square inch but will probably remain readable for no more than 30 years.

"Interestingly," said Zettl, "the Domesday Book, the great survey of England commissioned by William the Conqueror in 1086 and written on vellum, has survived over 900 years, while the 1986 BBC Domesday Project, a multimedia survey marking the 900th anniversary of the original Book, required migration from the original high-density laserdiscs within two decades because of media failure."

Zettl and his collaborators were able to buck data storage history by creating a programmable memory system that is based on a moveable part – an iron nanoparticle, approximately 1/50,000th the width of a human hair, that in the presence of a low voltage electrical current can be shuttled back and forth inside a hollow carbon nanotube with remarkable precision. The shuttle's position inside the tube can be read out directly via a simple measurement of electrical resistance, allowing the shuttle to function as a nonvolatile memory element with potentially hundreds of binary memory states.

"The shuttle memory has application for archival data storage with information density as high as one trillion bits per square inch and thermodynamic stability in excess of one billion years," Zettl said. "Furthermore, as the system is naturally hermetically sealed, it provides its own protection against environmental contamination."

The low voltage electrical write/read capabilities of the memory element in this electromechanical device facilitates large-scale integration and should make for easy incorporation into today's silicon processing systems. Zettl believes the technology could be on the market within the next two years and its impact should be significant.

"Although truly archival storage is a global property of an entire memory system, the first requirement is that the underlying mechanism of information storage for individual bits must exhibit a persistence time much longer than the envisioned lifetime of the resulting device," he said. "A single bit lifetime in excess of a billion years demonstrates that our system has the potential to store information reliably for any practical desired archival time scale."

The multiwalled carbon nanotube and enclosed iron nanoparticle shuttle were synthesized in a single step via pyrolysis of ferrocene in argon gas at a temperature of 1,000 degrees Celsius. The nanotube memory elements were then ultrasonically dispersed in isopropanol and deposited on a substrate. A transmission electron microscope provided high-resolution imaging in real time while the memory device was in operation. In laboratory tests, this device met all the essential requirements for digital memory storage including the ability to overwrite old data.

This research was primarily supported by the U.S. Department of Energy's Office of Science through its Basic Energy Sciences programs.

Berkeley Lab is a U.S. Department of Energy national laboratory located in Berkeley, California. It conducts unclassified scientific research and is managed by the University of California. Visit our Website at www.lbl.gov 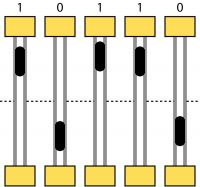