Burnout. It is a syndrome that is said to afflict humans who feel chronic stress. But after conducting a novel study using trail cameras showing the interactions between white-tailed deer fawns and predators, a Penn State researcher suggests that prey animals feel it, too.

"And you can understand why they do," said Asia Murphy, who recently graduated with a doctorate from Penn State's Intercollege Graduate Degree Program in Ecology. "Less than half of whitetail fawns live to see their first birthday, and many are killed by predators, such as coyotes, black bears and bobcats. Fawns instinctively 'know' they are in constant danger."

Ironically, the presence of humans -- who mean the fawns no harm and likely would protect them if they could -- only ratchets up the stress the young animals experience, Murphy added. Even if it's just people hiking on a trail in a state park, it is a disturbance to be avoided by fawns, leaving less landscape and less time for them to feed and evade predators.

"The presence of people creates an environment where the danger seems so high that the animals basically stop having vigilance behaviors," she said. "That was the surprising thing about my research -- when fawns perceive that there is so much danger coming from so many sources, their behavior seemed like they just relaxed, like there's no point in being ready to hide or flee. I saw that in older deer, too."

In areas where there are many predators and people present, fawns seem to relax instead of acting hypervigilant, she noted.

"Like so much constant stress leaves them burned out," she said.

The goal of the study was to examine how human-dominated landscapes influence the timing, frequency and physical spacing and locations of interactions between humans, black bears, coyotes, bobcats and fawns, as well as to contrast deer vigilance behavior at each location. The researchers compared "camera trap" data from six surveys in and around three central Pennsylvania public forest sites with different surroundings -- forest, agriculture and development.

The Bald Eagle and Rothrock State Forest sites were surrounded by agriculture and low-density housing, whereas the Susquehannock State Forest site was surrounded by largely unbroken forest. Analyzing more than 10,000 photos, researchers observed markedly different behavior of fawns, adult deer and predators at the three locations, dictated, they suggest, by the presence of humans and their changes to the landscape.

Camera trap surveys began in mid- to late-May, which coincided with the start of the period when fawns are born and are most vulnerable to predation, and ended in mid-September, before the hunting season. Researchers randomly established 18 camera locations at each of the three study sites, spaced a minimum of a half mile apart within an area of about 100 square miles.

At least one camera was placed at each location and typically remained there for an average of 47 days before being moved to a new location. Cameras were set to take three pictures when triggered by an animal with a one-minute rest period. Each location was baited with a combination of bobcat urine, a skunk-based scent attractant and a fatty acid tablet.

In findings recently published in the Journal of Animal Ecology, the researchers reported that bears, bobcats, coyotes, fawns and adult deer all had more frequent timing overlaps in the agriculture and development sites compared to the mostly unbroken forest site. In addition, factors that influenced deer vigilance, such as distance to forest edge and predator abundance in the agriculture and development sites, were not factors in the mostly unbroken forest site.

"By taking into account the different antipredator behaviors that can be detected and the different scales at which these behaviors might occur, we were able to gain a more comprehensive picture of how humans reduce available niche space for wildlife," Murphy said. "It was clear that disturbed landscapes -- agriculture and development -- create more time and space overlap between predators and fawns."

This research is important because it is among the first to document that human land disturbance influences the dynamics of predator-prey interactions, according to Murphy's adviser, Duane Diefenbach, adjunct professor of wildlife ecology in the College of Agricultural Sciences. Wildlife biologists suspected human interference enhances opportunities for predators, but they had not seen proof.

"This study shows that antipredator behavior by fawns varies across space, time and predator species," said Diefenbach, who is leader of the U.S. Geological Survey's Pennsylvania Cooperative Fish and Wildlife Research Unit at Penn State. "When multiple predator species co-occur but vary in their use of space, time of activity and hunting mode, it creates a complex landscape for prey trying to avoid predation. Human presence has the potential to shift interactions among predators and prey and where and when encounters occur."

The Pennsylvania Game Commission funded and supported this research.

When fawns perceive constant danger from many sources, they almost seem to relax 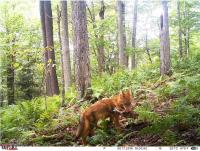 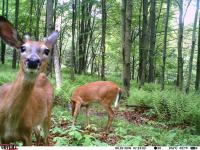