The more than 200 species in the family Mormyridae communicate with one another in a way completely alien to our species: by means of electric discharges generated by an organ in their tails.

In a 2011 article in Science that described a group of mormyrids able to perceive subtle variations in the waveform of electric signals, Washington University in St. Louis biologist Bruce Carlson, PhD, noted that another group of mormyrids are much less discriminating (see illustration).

The fish with nuanced signal discrimination can glean a stunning amount of information from electric signals, including the signaler's species, sex, age, relative dominance status, and possibly even individual identity. They can also detect emotional states, such as aggression, submission, courtship and active exploration (see video below).

The fish with the simpler communication system were less studied and less well understood.

In the August 4 issues of the online journal eLife, Carlson and graduate student Christa Baker describe how they discovered the basis for the perceptual differences between the two groups of fish by studying the fish's sensory receptors.

"There had to be a neural correlate for the perceptual differences, so we looked to see if something was happening 'out in the periphery' where the signals are originally detected and encoded for processing in the brain," Carlson said.

"As far as we know, this is the first time anyone has found a receptor tuned to group communication signals rather than those coming from individuals," Carlson said.

Weakly electric fish have sensory receptors in their skin, called knollenorgans, that detect electric pulses from their neighboring fish. The receptors are broadly distributed over the bodies of the discriminating fish, but in the less discriminating fish they are grouped into three clusters, or rosettes, on both sides of the head.

"We knew from work in the 1960s that there were differences in the physiology, or electrical behavior, of the sensory receptors," Baker said. "The broadly distributed receptors fire spikes, or action potentials, whereas the clustered receptors produce oscillating potentials at a constant frequency."

"We learned that when the oscillating recepters receive an electric signal, they reset their oscillation to a particular point in the cycle," she said. "This phase reset briefly syncrhonizes the oscillations of different receptors."

"No one had ever described anything like this in a sensory system before," Carlson said. "This is the first sensory receptor we know of that encodes stimuli by resetting the phase of ongoing oscillations."

"We investigated how the phase reset varied with different stimuli," Baker said, "and we found that the oscillating receptors do not encode the same information as spiking receptors."

The spiking receptors, which fire a nerve impulse every time there is an upward or downward excursion in the signal, are very good at encoding precise timing cues in signaling waveforms. But oscillating receptors encode only the onset of the signal and its point of origin.

"Fish with oscillating receptors are not behaviorally sensitive to waveform variation at least in part because the precise timing cues are not encoded by their receptors," Baker said.

So why do the fish with oscillating receptors bother to signal at all? What information do their receptors provide? The answer emerged when the scientists looked at how the receptors are tuned.

"We found that the timing patterns they were most sensitive to were patterns that can only be produced by the collective signaling of large groups of fish," Baker said. "We think that the oscillating receptors help fish detect and locate those groups."

"Based on what I've seen in the field," he said, "the fish able to perceive small differences in the communication signals tend to be solitary and territorial, whereas the fish whose receptors are tuned to group signals tend to be more gregarious.

"My guess is that these two different lifestyles place very different selective pressures on communication. If you're solitary and territorial and you detect another fish in the area, you want to know exactly who that fish is. Is it a potential competitor, a potential mate, or a different species you're not worried about?

"On the other hand, if you're living in a shoal or school of fish, it's not so important to identify individuals. Just sticking with the group is going to be a successful strategy."

Fish that have their own fish finders 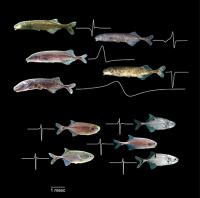 Why Do Mormyrid Fish Have Two Different Signal Systems? 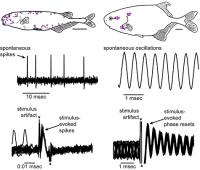