Eelgrass, a species of seagrass named for its long slippery texture, is one of nature's superheroes. It offers shade and camouflage for young fish, helps anchor shorelines, and provides food and habitat for many marine species.

A University of Washington study adds one more superpower to the list of eelgrass abilities: warding off the toxin-producing algae that regularly close beaches to shellfish harvests. Researchers found evidence that there are significantly fewer of the single-celled algae that produce harmful toxins in an area more than 45 feet, or 15 meters, around an eelgrass bed.

"We're not in the laboratory. The effect we're seeing is happening in nature, and it's an effect that's really widespread within this group of harmful algae. What we see is this halo of reduced abundance around the eelgrass beds," said Emily Jacobs-Palmer, a research scientist at the UW. She is the lead author of the study published this spring in the open-access journal PeerJ.

Researchers sampled five coastal sites three times in the spring and summer of 2017. Four sites were within Puget Sound and one was in Willapa Bay, on Washington's outer coast.

In addition to a traditional visual ecological survey at each site, the researchers used a type of genetic forensics to detect species that might not be easily seen or present at the time of the survey.

Scientists put on waders and walked parallel to shore in water less than knee deep while scooping up seawater samples to analyze the environmental DNA, or eDNA, present. This method collects fragments of genetic material to identify organisms living in the seawater.

The researchers sampled water from each site at the same point in the tidal cycle both inside the eelgrass bed and at regular intervals up to 45 feet away from the edge. For comparison they also surveyed a location farther away over bare seabed.

"In the DNA fragments we saw everything from shellfish to marine worms, osprey, bugs that fell in the water," Jacobs-Palmer said. "It's quite fascinating to just get this potpourri of organisms and then look for patterns, rather than deciding on a pattern that we think should be there and then looking for that."

The researchers analyzed the eDNA results to find trends among 13 major groups of organisms. They discovered that dinoflagellates, a broad class of single-celled organism, were scarcer in and around the eelgrass beds than in surrounding waters with bare seabed.

"We were asking how the biological community changes inside eelgrass beds, and this result was so strong that it jumped out at us, even though we weren't looking for it specifically," said senior author Ryan Kelly, a UW associate professor of marine and environmental affairs.

The result has practical applications, since certain species of dinoflagellate populations can spike and produce toxins that accumulate in shellfish, making the shellfish dangerous or even deadly to eat.

The phrase "harmful algal bloom" has a formal definition that was not measured for this study. But authors say the trend appeared when the overall dinoflagellate populations were high.

"I have heard people talk about a trade-off between shellfish and eelgrass, in terms of land use in Puget Sound. Now, from our perspective, there's not a clean trade-off between those things -- these systems might be able to complement one another," Kelly said.

To explore the reasons for the result, the authors looked at differences in water chemistry or current motion around the bed. But neither could explain why dinoflagellate populations were lower around the eelgrass.

Instead, the authors hypothesize that the same biological reasons why dinoflagellates don't flourish inside eelgrass beds -- likely bacteria that occur with eelgrass and are harmful to dinoflagellates -- may extend past the bed's edge.

"It was known that there is some antagonistic relationship between eelgrass and algae, but it's really important that this effect seems to span beyond the bounds of the bed itself," Jacobs-Palmer said.

The discovery of a "halo effect" by which eelgrass discourages the growth of potentially harmful algae could have applications in shellfish harvesting, ecological restoration or shoreline planning.

"These beds are often really large, and that means that their perimeter is also really large," Jacobs-Palmer said. "That's a lot of land where eelgrass is potentially having an effect."

In follow-up work, researchers chose two of the sites, in Port Gamble on the Kitsap Peninsula and Skokomish on Hood Canal, to conduct weekly sampling from late June through October 2019. They hope to verify the pattern they discovered and learn more about the environmental conditions that might allow the halo to exist.

Other co-authors on the recent paper are postdoctoral researcher Ramón Gallego and master's student Kelly Cribari in the UW School of Marine and Environmental Affairs; Micah Horwith, a former UW graduate student and Washington State Department of Natural Resources scientist now with the state Department of Ecology; Ana Ramón-Laca at the National Oceanic and Atmospheric Administration; and Emily Kunselman at the University of California, San Diego. This research was funded by the Washington State Department of Natural Resources. The Skokomish Tribe provided access to one of the study sites. 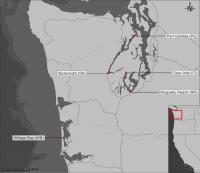