Current marine protected areas in the Southern Ocean need to be at least doubled to adequately safeguard the biodiversity of the Antarctic, according to a new CU Boulder study published today, Earth Day, in the journal PLOS ONE.

Proposals under consideration by an international council this year would significantly improve the variety of habitats protected, sustain fish populations and enhance the region's resilience to the effects of climate change, the authors say.

"Compared to the rest of the world's oceans, we have some of the healthiest marine systems left in the world in Antarctica," said Cassandra Brooks, author of the new paper and assistant professor in the Environmental Studies Program. "But there are vast areas of the Southern Ocean that are left completely unprotected."

At present, almost 12 percent of the Southern Ocean is designated as part of marine protected areas, or MPAs. MPAs - especially "no-take" MPAs, or marine reserves which do not allow any fishing - have been shown to support the abundance and diversity of species.

"But percentages aren't enough," said Brooks. "You want protected areas to be representative of all the different life that's in the Southern Ocean."

The Antarctic region is home to as many as 10,000 species - including whales, seals, penguins, fish, corals and giant Antarctic sea spiders - many of which are found nowhere else in the world. And as far as scientists know, none of them have yet gone extinct from climate change or other human actions.

If additional marine protected areas currently under negotiation by the Convention on the Conservation of Antarctic Marine Living Resources (CCAMLR) are implemented, they would encompass almost 22 percent of the Southern Ocean and achieve at least 10 percent representation of its over 40 unique habitats.

"As marine scientists, it's important we have places left that we can actually study as healthy systems that are undergoing climate stress," said Brooks.

But the Southern Ocean supports international commercial fisheries for Patagonian and Antarctic toothfish, sold as Chilean sea bass, as well as krill, which is farmed for fish meal and omega-3 fatty acid pills. Less than 5 percent of the Southern Ocean's protection bans fishing.

Pressure on these fisheries has increased in recent years and is likely to continue, due to the popularity of omega-3 pills and demand for fish meal - which is fed to pigs, chickens, and other farmed fish. At the same time, climate change pressures on Southern Ocean ecosystems are also increasing.

To help boost the resilience of these ecosystems, "we really need large areas that are off limits to extraction," said Brooks. "Antarctica is a global commons that belongs to all of us."

A system in flux

The importance of the Antarctic cannot be understated. The Southern Ocean stores 90 percent of the world's freshwater, drives global ocean circulation and regulates our entire climate.

"At its most basic level, all Earth's systems depend on the Southern Ocean," said Brooks. "And Antarctica is one of the fastest changing places in the whole world due to climate change. It is impacting the entire ecosystem in ways that we really don't understand yet."

Populations of phytoplankton communities and krill - at the bottom of the food chain - to penguins and toothfish - at the very top - are changing. The whole system is in flux.

Most of these animals cannot migrate or relocate. They're already as far south as they can go.

Building on work from previous studies, Brooks and her co-authors wanted to know: Are we protecting the right areas that actually will conserve biodiversity?

So they looked at the variety of Antarctic ocean habitats, from the seafloor to the open water, and examined what percentage of them rest within existing and proposed protected areas and which ones do not.

They found that for protections to be fully representative of the biodiversity in the Southern Ocean, and better protect many ocean birds and mammals, they would need to be increased even more than protections currently proposed by CCAMLR. This international treaty group of 26 member states is next scheduled to meet in October of 2020.

Adopting these protections would be an important milestone in the right direction, said Brooks.

Additional coauthors on the new study include Zephyr Sylvester and Christa Torrens of CU Boulder, Steven L. Chown of Monash University, Lucinda Douglass and Justine Shaw of The University of Queensland, and Ben Raymond of the Australian Antarctic Division, Tasmania, Australia.

More protections needed to safeguard biodiversity in the Southern Ocean 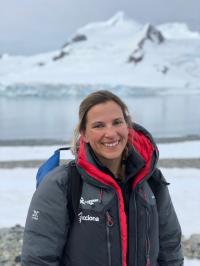