Before Tropical Storm Franklin made landfall in east-central Mexico, the storm was intensifying. Two NASA satellites provided a look at the storm's cloud heights and extent and rainfall within.

The Global Precipitation Measurement mission or GPM core observatory satellite had an informative pass over Tropical Storm Franklin on August 9, 2017 at 0302 UTC (Aug. 8 at 11:02 p.m. EDT). At that time, the intensifying tropical storm had moved from Mexico's Yucatan Peninsula into the southwestern Gulf of Mexico's Bay of Campeche.

Two of the instruments aboard GPM, the GPM's Microwave Imager (GMI) and Dual-Frequency Precipitation Radar (DPR) data, showed that Franklin contained a few heavy bands of convective rainfall. GPM's DPR found rain falling at a rate of over rain 2.4 inches (62 mm) per hour in bands of intense storms moving around the southwestern side of the storm.

On August 9 at 2:54 p.m. EDT NASA-NOAA's Suomi NPP satellite captured a visible image of Tropical Storm Franklin just before landfall in east-central Mexico. The image showed a concentration of powerful thunderstorms over the low-level center of circulation. Bands of thunderstorms in the western and southern quadrant blanketed the coast of eastern Mexico, bringing rainfall and gusty winds.

At 2 a.m. EDT on August, 10, the National Hurricane Center (NHC) noted that Franklin made landfall on the coast of Mexico as a Category 1 hurricane on the Saffir-Simpson Hurricane Scale. At that time, Franklin's maximum sustained winds were near 85 mph (140 kph) with higher gusts. The center of Hurricane Franklin was located near latitude 20.0 degrees north latitude and 96.7 degrees west longitude.

By August 10 at 8 a.m. EDT a Tropical Storm Warning was in effect for the coast of Mexico from Cabo Rojo to Roca Partida, Mexico.

At 8 a.m. EDT (1200 UTC), the center of Tropical Storm Franklin was located near 19.8 degrees north latitude and 98.3 degrees west longitude. Franklin was moving a little south of west near 15 mph (24 kph) and this motion is expected to continue today. On the forecast track, the center of Franklin should continue to move over Mexico today. Maximum sustained winds have decreased to near 40 mph (65 kph) with higher gusts. The estimated minimum central pressure is 997 millibars.

The rainfall GPM observed before was soaking Mexico as it continued moving inland. The National Hurricane Center noted that Franklin is expected to produce total rainfall accumulations of 4 to 8 inches with isolated maximum amounts of 15 inches possible across the Mexican states of northern Veracruz, Puebla, Tlaxacala, eastern Guanajuato, Hidalgo, Queretaro and eastern San Luis Potosi in eastern Mexico. These rains are capable of producing life-threatening flash floods and mudslides.

Additional weakening is expected as Franklin moves over Mexico, and the cyclone is likely to dissipate later today.

For updates on Franklin, visit the NHC website: http://www.nhc.noaa.gov. 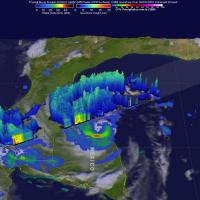 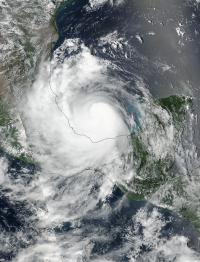