Quantum computers promise great advances in many fields - from cryptography to the simulation of protein folding. Yet, which physical system works best to build the underlying quantum bits is still an open question. Unlike regular bits in your computer, these so-called qubits cannot only take the values 0 and 1, but also mixtures of the two. While this potentially makes them very useful, they also become very unstable.

One approach to solve this problem bets on topological qubits that encode the information in their spatial arrangement. That could provide a more stable and error-resistant basis for computation than other setups. The problem is that no one has ever definitely found a topological qubit yet.

An international team of researchers from Austria, Copenhagen, and Madrid around Marco Valentini from the Nanoelectronics group at IST Austria now have examined a setup which was predicted to produce the so-called Majorana zero modes - the core ingredient for a topological qubit. They found that a valid signal for such modes can in fact be a false flag.

Half of an Electron

The experimental setup is composed of a tiny wire just some hundred nanometers - some millionths of a millimeter - long, grown by Peter Krogstrup from Microsoft Quantum and University of Copenhagen. These appropriately-called nanowires form a free-floating connection between two metal conductors on a chip. They are coated with a superconducting material that loses all electrical resistance at very low temperatures. The coating goes all the way up to a tiny part left at one end of the wire, which forms a crucial part of the setup: the junction. The whole contraption is then exposed to a magnetic field.

The scientists' theories predicted that Majorana zero modes - the basis for the topological qubit they were looking for - should appear in the nanowire. These Majorana zero modes are a strange phenomenon, because they started out as a mathematical trick to describe one electron in the wire as composed of two halves. Usually, physicists do not think of electrons as something that can be split, but using this nanowire setup it should have been possible so separate these "half-electrons" and to use them as qubits.

"We were excited to work on this very promising material platform," explains Marco Valentini, who joined IST Austria as an intern before becoming a PhD student in the Nanoelectronics group. "What we expected to see was the signal of Majorana zero modes in the nanowire, but we found nothing. First, we were confused, then frustrated. Eventually, and in close collaboration with our colleagues from the Theory of Quantum Materials and Solid State Quantum Technologies group in Madrid, we examined the setup, and found out what was wrong with it."

After attempting to find the signatures of the Majorana zero modes, the researchers began to vary the nanowire setup to check whether any effects from its architecture were disturbing their experiment. "We did several experiments on different setups to find out what was going wrong," Valentini explains. "It took us a while, but when we doubled the length of the uncoated junction from a hundred nanometers to two hundred, we found our culprit."

When the junction was big enough the following happened: The exposed inner nanowire formed a so-called quantum dot - a tiny speck of matter that shows special quantum mechanical properties due to its confined geometry. The electrons in this quantum dot could then interact with the ones in the coating superconductor next to it, and by that mimic the signal of the "half-electrons" - the Majorana zero modes - which the scientists were looking for.

"This unexpected conclusion came after we established the theoretical model of how the quantum dot interacts with the superconductor in a magnetic field and compared the experimental data with detailed simulations performed by Fernando Peñaranda, a PhD student in the Madrid team," says Valentini.

"Mistaking this mimicking signal for a Majorana zero mode shows us how careful we have to be in our experiments and in our conclusions," Valentini cautions. "While this may seem like a step back in the search for Majorana zero modes, it actually is a crucial step forward in understanding nanowires and their experimental signals. This finding shows that the cycle of discovery and critical examination among international peers is central to the advancement of scientific knowledge." 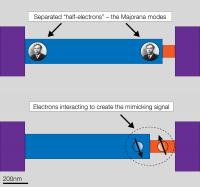