One dozen flight mirrors are now installed on NASA's James Webb Space Telescope, out of the eighteen mirror segments that make up the primary mirror. The assembly of the primary mirror is an important milestone for the Webb telescope, but is just one component of this huge and complex observatory.

Since December 2015, the team of scientists and engineers have been working tirelessly to install all the primary mirror segments onto the telescope structure in the large clean room at NASA's Goddard Space Flight Center in Greenbelt, Maryland. The twelfth mirror was installed on January 2, 2016.

"This milestone signifies that all of the hexagonal shaped mirrors on the fixed central section of the telescope structure are installed and only the 3 mirrors on each wing are left for installation," said Lee Feinberg, NASA's Optical Telescope Element Manager at NASA Goddard. "The incredibly skilled and dedicated team assembling the telescope continues to find ways to do things faster and more efficiently."

Each hexagonal-shaped segment measures just over 4.2 feet (1.3 meters) across and weighs approximately 88 pounds (40 kilograms). After being pieced together, the 18 primary mirror segments will work together as one large 21.3-foot (6.5-meter) mirror. The primary mirror will unfold and adjust to shape after launch. The mirrors are made of ultra-lightweight beryllium. The mirrors are placed on the telescope's backplane using a robotic arm, guided by engineers. The full installation is expected to be completed in a few months.

The mirrors were built by Ball Aerospace & Technologies Corp., Boulder, Colorado. Ball is the principal subcontractor to Northrop Grumman for the optical technology and lightweight mirror system. The installation of the mirrors onto the telescope structure is performed by Harris Corporation of Rochester, New York. Harris Corporation leads integration and testing for the telescope.

While the mirror assembly is a very significant milestone, there are many more steps involved in assembling the Webb telescope. The primary mirror and the tennis-court-sized sunshield are the largest and most visible components of the Webb telescope. However, there are four smaller components that are less visible, yet critical. The instruments that will fly aboard Webb - cameras and spectrographs with detectors able to record extremely faint signals -- are part of the Integrated Science Instrument Module (ISIM), which is currently undergoing its final cryogenic vacuum test and will be integrated with the mirror later this year.

The Near InfraRed Spectrograph (NIRSpec) has programmable microshutters which enable observation up to 100 objects simultaneously. The Near Infrared Camera (NIRCam) is equipped with coronagraphs, instruments that allow astronomers to take pictures of very faint objects around a central bright object, like stellar systems.

The Webb telescope also has a cryocooler for cooling the Mid-Infrared Instrument (MIRI) to a very cold 7 Kelvin so they can work. MIRI has both a camera and a spectrograph that sees light in the mid-infrared region of the electromagnetic spectrum, with wavelengths that are longer than our eyes see. There's also the Fine Guidance Sensor (FGS) allows Webb to point precisely, so that it can obtain high-quality images.

The James Webb Space Telescope is the scientific successor to NASA's Hubble Space Telescope. It will be the most powerful space telescope ever built. Webb is an international project led by NASA with its partners, the European Space Agency and the Canadian Space Agency.

For more information about NASA's Webb telescope and all of its components, visit: http://www.nasa.gov/webb or jwst.nasa.gov

For more information about the mirror installation, visit: http://www.nasa.gov/press-release/nasa-s-webb-space-telescope-receives-first-mirror-installation 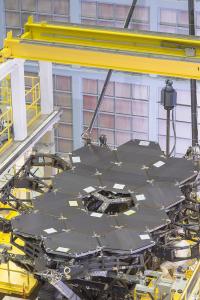