An analysis of the Great Barrier Reef during a time prior to it becoming the modern shallow reef has found the World Heritage Listed 'wonder' almost drowned because of rapid sea-level rise from melting glaciers and polar ice sheets - with implications for conservation in an era of climate change.

The University of Sydney-led international research shows the Great Barrier Reef is resilient, with shallow reef growth recommencing once the rapid sea-level rise stabilised during the Last Interglacial period more than 125,000 years ago.

However a range of pressures on the modern reef - including pesticide run-off, warming sea temperatures and dredging from mining operations - combined with predicted sea-level rises could threaten the reef's survival.

The research has been published in the peer-reviewed Global and Planetary Change.

Geologists consider the Last Interglacial to be an important comparative period because temperatures and sea levels were higher than now but similar to where the Earth might be headed if CO2 emissions remain unchecked.

Lead author Dr Belinda Dechnik from the Geocoastal Research Group in the School of Geosciences undertook the research - which included analysis of unexposed reef now up to 40 metres below sea-level - as part of her PhD.

"This provides the first snapshot of this paleo-reef against a background of rapid environmental change, including possible mass ice-sheet collapse," Dr Dechnik said.

The research also provided an accurate identification of the age of the fossil reef that grew before the modern Great Barrier Reef, some 129,000-121,000 years ago.

"The Great Barrier Reef is like a sponge cake - the modern reef is just the last layer," Dr Dechnik explained.

To study the ancient reef layer, researchers analysed specimens from the 1970s stored at Geosciences Australia in Canberra and in 2015 cored samples directly from the reef (the subject of an upcoming paper), which was made possible with an Australian Research Council grant as part of its Discovery Program.

University of Sydney Associate Professor Jody Webster, who supervised Dr Dechnik's PhD, said the research was the most comprehensive investigation of this second-last layer; a novel finding was the climate-change impact.

"This stage of the reef appears to have come close to drowning and therefore almost died due to major environmental changes," Associate Professor Webster said.

Dr Dechnik said it was expected that the rate of future sea-level rises resulting from climate change may not be as extreme as experienced previously but it could still be significant. In addition, it was expected that sea levels on the Great Barrier Reef could get as high as six metres - the same level as during the Last Interglacial - depending on the trajectory of mass ice sheet collapse.

"In combination with climate change predictions by the Intergovernmental Panel on Climate Change and in the absence of improvements to reef management and human impacts, sea-level pressures could tip the reef over the edge, potentially drowning it for good," Dr Dechnik said.

The paper, "The evolution of the Great Barrier Reef during the Last Interglacial Period," was published over the Christmas-New Year break in the journal Global and Planetary Change at http://www.sciencedirect.com/science/article/pii/S0921818116302570. 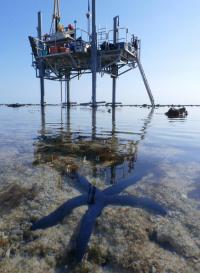 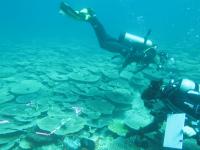