For sea turtle hatchlings struggling to reach the ocean, success may depend on having flexible wrists that allow them to move without disturbing too much sand. A similar wrist also helps a robot known as "FlipperBot" move through a test bed, demonstrating how animals and bio-inspired robots can together provide new information on the principles governing locomotion on granular surfaces.

Both the baby turtles and FlipperBot run into trouble under the same conditions: traversing granular media disturbed by previous steps. Information from the robot research helped scientists understand why some of the hatchlings they studied experienced trouble, creating a unique feedback loop from animal to robot – and back to animal.

The research could help robot designers better understand locomotion on complex surfaces and lead biologists to a clearer picture of how seat turtles and other animals like mudskippers use their flippers. The research could also help explain how animals evolved limbs – including flippers – for walking on land.

"We are looking at different ways that robots can move about on sand," said Daniel Goldman, an associate professor in the School of Physics at the Georgia Institute of Technology. "We wanted to make a systematic study of what makes flippers useful or effective. We've learned that the flow of the materials plays a large role in the strategy that can be used by either animals or robots."

The research began in 2010 with a six-week study of hatchling loggerhead sea turtles emerging at night from nests on Jekyll Island, one of Georgia's coastal islands. The research was done in collaboration with the Georgia Sea Turtle Center.

Nicole Mazouchova, then a graduate student in the Georgia Tech School of Biology, studied the baby turtles using a trackway filled with beach sand and housed in a truck parked near the beach. She recorded kinematic and biomechanical data as the turtles moved in darkness toward an LED light that simulated the moon.

Mazouchova and Goldman studied data from the 25 hatchlings, and were surprised to learn that they managed to maintain their speed regardless of the surface on which they were running.

"On soft sand, the animals move their limbs in such a way that they don't create a yielding of the material on which they're walking," said Goldman. "That means the material doesn't flow around the limbs and they don't slip. The surprising thing to us was that the turtles had comparable performance when they were running on hard ground or soft sand."

The key to maintaining performance seemed to be the ability of the hatchlings to control their wrists, allowing them to change how they used their flippers under different sand conditions.

"On hard ground, their wrists locked in place, and they pivoted about a fixed arm," Goldman explained. "On soft sand, they put their flippers into the sand and the wrist would bend as they moved forward. We decided to investigate this using a robot model."

That led to development of FlipperBot, with assistance from Paul Umbanhowar, a research associate professor at Northwestern University. The robot measures about 19 centimeters in length, weighs about 970 grams, and has two flippers driven by servo-motors. Like the turtles, the robot has flexible wrists that allow variations in its movement. To move through a track bed filled with poppy seeds that simulate sand, the robot lifts its flippers up, drops them into the seeds, then moves the flippers backward to propel itself.

Mazouchova, now a Ph.D. student at Temple University, studied many variations of gait and wrist position and found that the free-moving mechanical wrist also provided an advantage to the robot.

"In the robot, the free wrist does provide some advantage," said Goldman. "For the most part, the wrist confers advantage for moving forward without slipping. The wrist flexibility minimizes material yielding, which disturbs less ground. The flexible wrist also allows both the robot and turtles to maintain a high angle of attack for their bodies, which reduces performance-impeding drag from belly friction."

The researchers also noted that the robot often failed when limbs encountered material that the same limbs had already disturbed. That led them to re-examine the data collected on the hatchling turtles, some of which had also experienced difficulty walking across the soft sand.

"When we saw the turtles moving poorly, they appeared to be suffering from the same failure mode that we saw in the robot," Goldman explained. "When they interacted with materials that had been previously disturbed, they tended to lose performance."

Mazouchova and Goldman then worked with Umbanhowar to model the robot's performance in an effort to predict how the turtle hatchlings should respond to different conditions. The predictions closely matched what was actually observed, closing the loop between robot and animal.

"The robot study allowed us to test how principles applied to the animals," Goldman said.

While the results may not directly improve robot designs, what the researchers learned should contribute to a better understanding of the principles governing movement using flippers. That would be useful to the designers of robots that must swim through water and walk on land.

"A multi-modal robot might need to use paddles for swimming in water, but it might also need to walk in an effective way on the beach," Goldman said. "This work can provide fundamental information on what makes flippers good or bad. This information could give robot designers clues to appendage designs and control techniques for robots moving in these environments."

The research could ultimately provide clues to how turtles evolved to walk on land with appendages designed for swimming.

"To understand the mechanics of how the first terrestrial animals moved, you have to understand how their flipper-like limbs interacted with complex, yielding substrates like mud flats," said Goldman. "We don't have solid results on the evolutionary questions yet, but this certainly points to a way that we could address these issues."

This research has been supported by the National Science Foundation under grant CMMI-0825480 and the Physics of Living Systems PoLS program, the U.S. Army Research Laboratory's (ARL) Micro Autonomous Systems and Technology (MAST) Program under cooperative agreement W911NF-08-2-0004, the U.S. Army Research Office (ARO) and the Burroughs Wellcome Fund Career Award. Any conclusions are those of the authors and do not necessarily represent the official views of the NSF, ARL or ARO. 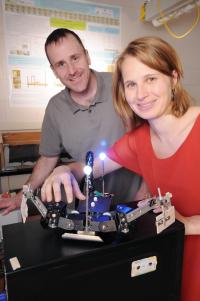 Daniel Goldman and Nicole Mazouchova, Georgia Institute of Technology (2 of 2)