When, in 2014, Brazilian researchers stumbled across a never-before-seen red-eyed leafhopper feeding inside the rosettes of bromeliads, growing in the restingas of southeastern Brazil, they were certain it was a one-of-a-kind discovery. Described as new-to-science species, as well as genus (Cavichiana bromelicola) and added to the sharpshooter tribe Cicadellini, it became the first known case of a leafhopper feeding on otherwise nutrition-poor bromeliads in their natural habitat.

Several years later, however, a team of entomologists from Universidade Federal do Rio de Janeiro carried out fieldwork in a mountainous area of southeastern Brazil and, as a result, another bromelicolous leafhopper species of the genus was discovered: Cavichiana alpina. Only, the new one appeared even more spectacular.

The new species, described and illustrated in the open-access journal Zoologia, is known from Itatiaia National Park (state of Minas Gerais, southeastern Brazil), where it can be found at altitudes above 1,800 m a.s.l. In fact, its characteristic mountainous habitat came to determine its species name (alpina). In contrast, its relative was originally described exclusively from sea level regions, even though the latest field trips have recorded it from a site located at 1,250 m a.s.l.

Slightly larger than the previously known C. bromelicola and similarly red-eyed, what most remarkably sets apart the newly-described species is its colouration. Rather than a single large yellow blotch contrasting against the dark-brown to black back of the insect, this sharpshooter sports a motley amalgam of red and blue covering most of its upper side.

In conclusion, the researchers explain that the peculiarity of the two known Cavichiana species is best attributed to a putative common ancestor that had likely once been widely distributed in southeastern and southern Brazil. Later, they speculate, a vicariant event, such as the uplift of the southeastern Brazilian mountain ranges during the latest Eocene and Oligocene, might have caused its diversification into two separate species. 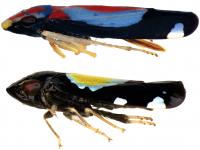 The Two Known Species in the Studied Leafhopper Genus (Cavichiana)