In their paper, now published in Scientific Reports, the team analyzed a sample from a 66-million-year-old Tyrannosaurus rex tibia to provide evidence that vertebrate blood vessels - collagen and elastin structures that don't fossilize like mineral-based bone - may persist across geologic time through two natural, protein-fusing "cross-linking" processes called Fenton chemistry and glycation.

"SR-FTIR takes images and spectra of the same sample, and so you can reveal the distribution of protein-folding patterns, which helps to identify the possible cross-linking mechanisms," said Holman, a senior scientist in the Molecular Biophysics & Integrated Bioimaging Division.

Fenton chemistry and glycation are both non-enzymatic reactions - meaning they can occur in deceased organisms - that are driven by the iron present in the body. "The XRF microprobe revealed the presence of finely crystalline goethite, a very stable iron oxyhydroxide mineral, on the vessels that likely contributed to the preservation of organic molecules," said Fakra, an ALS research scientist.

The authors believe that the cross-linking reactions they found evidence of, combined with the protection offered from being surrounded by dense mineralized bone, can explain how original soft tissues persist.

Read more about this research

A team led by the U.S. Department of Energy Joint Genome Institute (JGI) at Berkeley Lab has reconstructed the genomes of 2,074 large and giant viruses found across the globe, drastically increasing the number of known viruses and providing a resource for future studies on this poorly understood group of viruses, called nucleocytoplasmic large DNA viruses (NCLDVs).

The work, recently published in Nature, drew from more than 8,500 publicly available metagenome datasets generated from samples of microbial communities, many of which were from freshwater ecosystems. (A metagenome is the entire collection of genetic information captured in a sample.)

The genomes of the large and giant viruses - which carry between 10 and 100 times more genes than most well-studied viruses - were digitally extracted from the other genetic information by filtering for a NCLDV-specific protein and then organized into distinct genomes known as metagenome-assembled genomes (MAGs). This process was performed, in part, using capabilities of the National Energy Research Scientific Computing Center (NERSC), also located at Berkeley Lab.

"This is the first study to take a more global look at giant viruses by capturing genomes of uncultivated giant viruses from environmental sequences across the globe, then using these sequences to make inferences about the biogeographic distribution of these viruses in the various ecosystems, their diversity, their predicted metabolic features and putative hosts," said Tanja Woyke, senior author of the study and head of JGI's Microbial Genomics Program.

After analyzing the genes identified in the viral MAGs, Woyke and her colleagues found that NCLDVs have evolved strategies to alter the metabolism of their host organisms (primarily single-celled eukaryotes, but also multicellular eukaryotic organisms) in order to optimize conditions for viral replication. Because eukaryotic microbes are known to play a big part in biogeochemical processes such as carbon and nitrogen cycling, the findings suggest that NCLDVs are a key part of understanding how ecosystems function.

Read the full release by JGI

Atomic-scale structural analyses performed at Berkeley Lab's Advanced Light Source (ALS) are helping scientists understand the inner workings of the enzyme "assembly lines" that microbes use to produce an important class of compounds, many of which have uses as antibiotics, antifungals, and immunosuppressants.

These cellular machines, known as nonribosomal peptide synthetases (NRPSs), are large, multi-enzyme clusters that synthesize compounds by passing a precursor molecule from one module to the next, with each "station" catalyzing a change in the molecule. In the past decade, researchers have learned a great deal about how individual NRPS modules work, but an understanding of how the assembly lines function as a whole has been lacking. In the hopes of eventually engineering custom NRPSs to make new and improved medicines, a team led by McGill University began investigating the bacterial NRPS that synthesizes the antibiotic gramicidin.

The scientists used the SIBYLS X-ray scattering beamline at the ALS to validate X-ray crystallography and small-angle X-ray scattering performed at the Canadian Light Source in Saskatchewan and the Advanced Photon Source at Argonne National Laboratory. The results, published in Science, show that the modules are surprisingly physically flexible, and that the assembly line can function in many different arrangements.

Gregory Hura, a Berkeley Lab biophysicist on the SIBYLS team and head of the Structural Biology Department in the Molecular Biophysics & Integrated Bioimaging Division, notes that the analytic capabilities of the beamline are helping decode the functionality of many important large molecules. "There is no surprise that macromolecules, responsible for the complex activities of life, are dynamic, modular, and multifaceted - but our appreciation for those dynamics has been hindered by a lack of modalities for sensing them. The newly upgraded SIBYLS beamline provides unique insights that complement crystallography and electron microscopy, and together, these technologies are helping us develop new medicines." 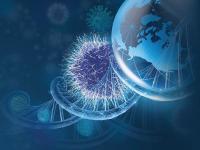