A study examines the response of penguin species to past human exploitation and recent climate change in Antarctica. Krill is a main food source for Antarctic penguins. However, the historic harvesting of whales and seals in addition to recent anthropogenic climate change are thought to have led to shifts in krill abundance over the past century. To better understand the ecological implications of these changes, Michael J. Polito and colleagues examined the diets of chinstrap and gentoo penguins in the Antarctic Peninsula by analyzing the nitrogen stable isotope values of amino acids in feathers from the 1930s, 1960s, 1980s, and 2010s. The authors found that both species had low trophic positions and primarily fed on krill during krill surpluses in the 1930s and 1960s caused by harvesting of krill-eating marine mammals. In contrast, during the latter half of the past century, gentoo penguins advanced a full trophic position and showed an adaptive shift from strictly eating krill to including fish and squid in their diets. Chinstrap penguins, however, continued to feed exclusively on krill. During the same time period, chinstrap penguins experienced severe population declines in the Antarctic Peninsula, whereas gentoo penguin populations increased. The findings suggest that species with specialized diets are more sensitive to human-induced environmental change than generalist foragers, according to the authors. 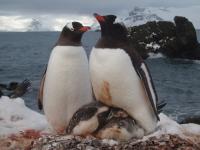 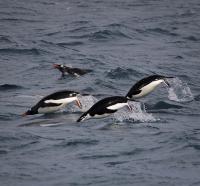 Gentoo and Chinstrap Penguins in Waters around the Antarctic Peninsula