Every day since Jan. 1, 1896, an observer has hiked to a spot at The Mohonk Preserve, a resort and nature area some 90 miles north of New York City, to record daily temperature and other conditions there. It is the rarest of the rare: a weather station that has never missed a day of temperature recording; never been moved; never seen its surroundings change; and never been tended by anyone but a short, continuous line of family and friends, using the same methods, for 114 years. On top of that, observers have for decades recorded related phenomena such as first appearances of spring peepers, migratory birds and blooming plants. At a time when scientists are wrestling to ensure that temperature readings from thousands of divergent weather stations can be accurately compared with one another to form a large-scale picture, Mohonk offers a powerful confirmation of warming climate, as well as a compelling multigenerational yarn. The story is told in an article by researchers from Columbia University's Lamont-Doherty Earth Observatory and Mohonk in the current issue of the Journal of Applied Meteorology and Climatology.

Mohonk was founded in 1869 by the Smileys, a close-knit Quaker family that still runs the 7,200-acre property on a high ridge in the Shawangunk Mountains. When the fledgling United States Weather Bureau (later the National Weather Service) founded an official station there, it supplied thermometers, log sheets and other materials; Albert K. Smiley, one of the twin brothers who founded the place, volunteered to man it. The thermometer (occasionally replaced by a new duplicate over the decades) has always been kept in a box out of direct sun, in the same place, a short walk from the Mohonk hotel; a brass rain gauge at the end of a boat dock is the 1896 original. In 1906, Albert's half-brother, Daniel, took over the readings. In 1930, Daniel's sons Bert and Doc followed. In 1937, Bert's son Daniel Smiley Jr., picked up the job. In addition, Daniel Jr., an old-school amateur naturalist, started recording many other observations, including first spring sightings of various creatures, on some 15,000 index cards. In 1988, the year before Daniel Jr. passed away, he handed his duties to Paul Huth, a longtime friend and employee. Today Huth or one of his staff still walks up to the box at 4 pm every day. The weather log, for many decades kept on hand-written sheets, lacks only 37 days of precipitation data from 1901, 1908 and 1909, due to a missing data sheet, and a few days when observers apparently didn't look at the rain gauge. The temperature record is complete.

Enter another father-son team. In 1971, Edward R. Cook, then serving as a military policeman at nearby West Point, became friends with Daniel Smiley Jr. Later, Cook became a tree-ring scientist and climatologist at Lamont, and began studying conifer trees at Mohonk--some of which turned out to be over 400 years old. From these, he extracted a rough record of weather in the Hudson Valley before Europeans settled. Then Edward Cook's son, Benjamin I. Cook, became a climate modeler at Lamont. It was under Benjamin's leadership that the Cooks and their colleagues at Mohonk began studying the instrumental readings and other data.

Starting in 1990s, Mohonk staffers spent hundreds of hours digitizing the records so they could be analyzed. "It is incredibly rare to have the level of continuity that we have at Mohonk," said Benjamin Cook. "Any one record cannot tell you anything definitively about climate globally or even regionally. But looking closely at sites like this can boost our confidence in the general trends that we see elsewhere, and in other records."

Indeed, the new study finds remarkable correlations with many other widely spread, but less continuous records. At Mohonk, average annual temperatures from 1896-2006 went up 2.63 degrees Fahrenheit. Global measurements in the same time over both land and oceans put the rise at about 1.2 to 1.4 degrees; but land temperatures are rising faster than those over the oceans, and those at Mohonk track the expected land trend closely. As expected also, temperatures are up in all seasons, but increases have been especially evident in summer heat waves, and this has been accelerating in recent years. Prior to 1980, it was rare for the thermometer to surpass about 89 degrees more than 10 days a year; since then, such events have come to Mohonk on at least 10 days a year—and often, on more than 20 days. At the same time, the number of freezing days has been decreasing--about a day less every five years over the long term, but since the 1970s, at the accelerated rate of a day every two years. This also matches wide-scale observations in North America and elsewhere.

The Mohonk records do not match wider trends in one area. The start of the growing season—the date on which freezing temperatures end—has been advancing steadily in many places, but not here. Instead, the total number of yearly above-freezing days is increasing because more unusually warm days are puncturing the winter. As described in an earlier study in the International Journal of Climatology, also by the Cooks and Mohonk staff, the effect has been a sort of an intermittent false spring that may expose some early-flowering plants to frost damage. The earliest flowering native plants like hepatica, bloodroot and red-berried elder are likely to be most affected, said Benjamin Cook. He said it is still too early to tell the ecological effects of such disruptions, but added: "The data from Mohonk will be invaluable for expanding our knowledge of how ecosystems respond to climate change." Temperature data after 2006 has not yet been analyzed, but Mohonk maintains an up-to-date online archive of the weather data accessible to the public.

The new study comes at a time when some skeptics have questioned the accuracy of long-term weather records, on the basis that many stations have been moved or that surroundings have changed, occasionally putting instruments nearer to buildings, parking lots or other possible heat sources that could skew readings upward. However, recent studies including one by scientists at the National Oceanic and Atmospheric Administration have found that such year-to-year inconsistencies cut both ways, and that instruments near developed spots actually more often read too cool rather than too hot. Researchers say every effort has been made to adjust for errors, and that errors one way or the other at individual stations basically cancel each other out, leaving the averages correct.

"Pictures, anecdotes, and cursory glances of poorly sited or maintained sites and weather stations may suggest problems, but until the data is analyzed it is impossible to conclude that the record is compromised by cold or warm biases," said Cook. "The advantage to Mohonk is that we can revisit the record in detail, with minimal corrections. This helps confirm the large-scale trends, and it helps us identify stations with errors that need to be corrected."

As for the long history behind the studies, he said: "We and the Smileys all just happened to be in the right place, at the right time."

The other authors of the study are Kevin J. Anchukaitis, also of Lamont; and Paul C. Huth, John E. Thompson and Shanan F. Smiley, of the Mohonk Preserve.

The paper, "A Homogeneous Record (1896-2006) of Daily Weather and Climate at Mohonk Lake, New York," is available from the authors.

The Earth Institute, Columbia University mobilizes the sciences, education and public policy to achieve a sustainable earth. Through interdisciplinary research among more than 500 scientists in diverse fields, the Institute is adding to the knowledge necessary for addressing the challenges of the 21st century and beyond. With over two dozen associated degree curricula and a vibrant fellowship program, the Earth Institute is educating new leaders to become professionals and scholars in the growing field of sustainable development. We work alongside governments, businesses, nonprofit organizaions and individuals to devise innovative strategies to protect the future of our planet. www.earth.columbia.edu

Lamont-Doherty Earth Observatory, a member of The Earth Institute, is one of the world's leading research centers seeking fundamental knowledge about the origin, evolution and future of the natural world. More than 300 research scientists study the planet from its deepest interior to the outer reaches of its atmosphere, on every continent and in every ocean. From global climate change to earthquakes, volcanoes, nonrenewable resources, environmental hazards and beyond, Observatory scientists provide a rational basis for the difficult choices facing humankind in the planet's stewardship. www.ldeo.columbia.edu

Journal of Applied Meteorology and Climatology 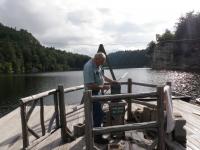