Planting cover crops in rotation between cash crops -- widely agreed to be ecologically beneficial -- is even more valuable than previously thought, according to a team of agronomists, entomologists, agroecologists, horticulturists and biogeochemists from Penn State's College of Agricultural Sciences.

"Cover cropping is one of the most rapidly growing soil and water conservation strategies in the Chesapeake Bay region and one we are really counting on for future improvements in water quality in the bay. Our analysis shows how the effort to improve water quality with cover crops will affect other ecosystem services that we expect from agricultural land."

Lead researcher Meagan Schipanski explained that commonly used measurements of ecosystem services can be misleading due to the episodic nature of some services and the time sensitivity of management windows.

Trade-offs occurred between economic metrics and environmental benefits, said Schipanski, who was a postdoctoral scholar at Penn State when she led the cover crop study. Now an assistant professor in the department of soil and crop sciences at Colorado State University, she noted that the planting of cover crops will become more attractive if fertilizer prices rise or if modest cost-sharing programs like the one currently in place in Maryland are developed.

Researchers simulated a three-year, soybean-wheat-corn rotation with and without cover crops in central Pennsylvania, which presented agroecological conditions broadly representative of the Northeast and mid-Atlantic regions. The cover crop rotation included red clover, frost-seeded into winter wheat in March, and winter rye, planted after corn was harvested in the fall. The research, funded by the U.S. Department of Agriculture, used simulated management practices, including tillage, synthetic fertilizer use and mechanical weed control.

The planting of cover crops already is accepted as an environmentally prudent practice. It is so beneficial, in fact, that the National Resource Conservation Service last month set a goal to increase the acres planted nationally in cover crops from the current 2 million to 20 million by 2020.

But many farmers have not planted cover crops because they have not seen financial incentives to do so, according to Kaye. That is largely because the traditional method of calculating the economic value of cover crops used by agricultural producers -- only estimating the resulting increase to cash-crop yields over a short period -- was not compelling.

"The most common metrics for evaluating cropping systems are grain and forage yields and short-term profitability," he said. "Within this context, cover crops are treated as a tool to be used only if they do not interfere with cash-crop production." 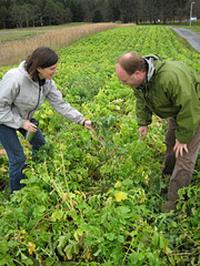