New research published today in the Proceedings of the National Academy of Sciences (PNAS) shows that land use by human societies has reshaped ecology across most of Earth's land for at least 12,000 years. The research team, from over ten institutions around the world, revealed that the main cause of the current biodiversity crisis is not human destruction of uninhabited wildlands, but rather the appropriation, colonization, and intensified use of lands previously managed sustainably.

The new data overturn earlier reconstructions of global land use history, some of which indicated that most of Earth's land was uninhabited even as recently as 1500 CE. Further, this new PNAS study supports the argument that an essential way to end Earth's current biodiversity crisis is to empower the environmental stewardship of Indigenous peoples and local communities across the planet.

"Our work shows that most areas depicted as 'untouched,' 'wild,' and 'natural' are actually areas with long histories of human inhabitation and use," says UMBC's Erle Ellis, professor of geography and environmental systems and lead author. He notes that they might be interpreted like this because in these areas, "societies used their landscapes in ways that sustained most of their native biodiversity and even increased their biodiversity, productivity, and resilience."

The interdisciplinary research team includes geographers, archaeologists, anthropologists, ecologists, and conservation scientists. They represent the U.S., the Netherlands, China, Germany, Australia, and Argentina, pooling their knowledge and expertise into a large-scale study that required a highly collaborative approach. They tested the degree to which global patterns of land use and population over 12,000 years were associated statistically with contemporary global patterns of high biodiversity value within areas prioritized for conservation.

"Our global maps show that even 12,000 years ago, nearly three-quarters of terrestrial nature was inhabited, used, and shaped by people," says Ellis. "Areas untouched by people were almost as rare 12,000 years ago as they are today."

The maps created for the study are available to view interactively online:

The cultural practices of early land users did have some impact on extinctions. However, by and large, land use by Indigenous and traditional communities sustained the vast majority of Earth's biodiversity for millennia. This finding comes at a critical time of heightened need to develop long-term, sustainable answers to our biggest environmental problems.

"The problem is not human use per se," explains professor and co-author Nicole Boivin, of the Max Planck Institute for the Science of Human History in Jena, Germany. "The problem is the kind of land use we see in industrialized societies--characterized by unsustainable agricultural practices and unmitigated extraction and appropriation."

To truly understand terrestrial nature today, it is necessary to understand the deep human history of that nature. Outside of a few remote areas, "nature as we know it was shaped by human societies over thousands of years," says Ellis. He believes that efforts to conserve and restore "won't be successful without empowering the Indigenous, traditional, and local people who know their natures in ways that scientists are only beginning to understand."

The authors argue that their findings confirm that biodiversity conservation and restoration will benefit by shifting focus from preserving land in a form imagined as "untouched" to supporting traditional and Indigenous peoples whose land use practices have helped sustain biodiversity over the long term.

"This study confirms on a scale not previously understood that Indigenous peoples have managed and impacted ecosystems for thousands of years, primarily in positive ways," says Darren J. Ranco, associate professor of anthropology and coordinator of Native American research at the University of Maine. "These findings have particular salience for contemporary Indigenous rights and self-determination."

"We must also assure that new attempts to protect lands and biodiversity are not just a green-grab of Indigenous lands," says Ranco. "We cannot re-create the worst of colonial policies meant to exclude Indigenous people, which would undoubtedly make the situation much worse for the environment and humanity."

"Our research demonstrates the connections between people and nature that span thousands of years," says Torben Rick, study co-author and curator of North American Archaeology at the Smithsonian National Museum of Natural History. "These connections are essential for understanding how we arrived at the present and how to achieve a more sustainable future."

This research represents a new form of collaboration across archaeology, global change science, conservation, and scholars of Indigenous knowledge. The co-authors hope this work will open the door to increasing the use of global land use history data by natural scientists, policymakers, activists, and others. Leaders in a range of fields can use these data, they note, to better understand and collaborate with Indigenous, traditional, and local peoples to conserve biodiversity and ecosystems over the long term.

"It is clear that the perspectives of Indigenous and local peoples should be at the forefront of global negotiations to reduce biodiversity loss," says Rebecca Shaw, chief scientist at World Wildlife Fund and another study co-author. "There is a global crisis in the way traditionally-used land has been transformed by the scale and magnitude of intensive human development. We have to change course if we are to sustain humanity over the next 12,000 years." 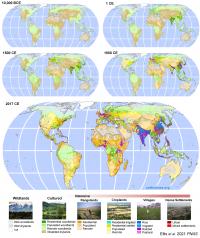 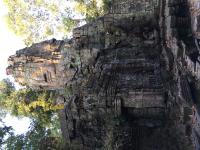