COLLEGE PARK, Md. – "Brain cap" technology being developed at the University of Maryland allows users to turn their thoughts into motion. Associate Professor of Kinesiology José 'Pepe' L. Contreras-Vidal and his team have created a non-invasive, sensor-lined cap with neural interface software that soon could be used to control computers, robotic prosthetic limbs, motorized wheelchairs and even digital avatars.

"We are on track to develop, test and make available to the public—within the next few years—a safe, reliable, noninvasive brain computer interface that can bring life-changing technology to millions of people whose ability to move has been diminished due to paralysis, stroke or other injury or illness," said Contreras-Vidal of the university's School of Public Health.

The potential and rapid progression of the UMD brain cap technology can be seen in a host of recent developments, including a just published study in the Journal of Neurophysiology, new grants from the National Science Foundation (NSF) and National Institutes of Health (NIH), and a growing list of partners that includes the University of Maryland School of Medicine, the Veterans Affairs Maryland Health Care System, the Johns Hopkins University Applied Physics Laboratory, Rice University and Walter Reed Army Medical Center's Integrated Department of Orthopaedics & Rehabilitation.

"We are doing something that few previously thought was possible," said Contreras-Vidal, who is also an affiliate professor in Maryland's Fischell Department of Bioengineering and the university's Neuroscience and Cognitive Science Program. "We use EEG [electroencephalography] to non-invasively read brain waves and translate them into movement commands for computers and other devices.

Contreras-Vidal and his team have published three major papers on their technology over the past 18 months, the latest a just released study in the Journal of Neurophysiology in which they successfully used EEG brain signals to reconstruct the complex 3-D movements of the ankle, knee and hip joints during human treadmill walking. In two earlier studies they showed (1) similar results for 3-D hand movement and (2) that subjects wearing the brain cap could control a computer cursor with their thoughts.

Alessandro Presacco, a second-year doctoral student in Contreras-Vidal's Neural Engineering and Smart Prosthetics Lab, Contreras-Vidal and co-authors write that their Journal of Neurophysiology study indicated "that EEG signals can be used to study the cortical dynamics of walking and to develop brain-machine interfaces aimed at restoring human gait function."

There are other brain computer interface technologies under development, but Contreras-Vidal notes that these competing technologies are either very invasive, requiring electrodes to be implanted directly in the brain, or, if noninvasive, require much more training to use than does UMD's EEG-based, brain cap technology.

Partnering to Help Sufferers of Injury and Stroke

Contreras-Vidal and his team are collaborating on a rapidly growing cadre of projects with researchers at other institutions to develop thought-controlled robotic prosthetics that can assist victims of injury and stroke.

Their latest partnership is supported by a new $1.2 million NSF grant. Under this grant, Contreras-Vidal's Maryland team is embarking on a four-year project with researchers at Rice University, the University of Michigan and Drexel University to design a prosthetic arm that amputees can control directly with their brains, and which will allow users to feel what their robotic arm touches.

"There's nothing fictional about this," said Rice University co-principal investigator Marcia O'Malley, an associate professor of mechanical engineering. "The investigators on this grant have already demonstrated that much of this is possible. What remains is to bring all of it -- non-invasive neural decoding, direct brain control and [touch] sensory feedback -- together into one device."

In a NIH-supported project now underway, Contreras -Vidal and his colleagues are pairing their brain cap's EEG-based technology with a DARPA-funded next-generation robotic arm designed by researchers at the Johns Hopkins Applied Physics Laboratory to function like a normal limb. And the UMD team is developing a new collaboration with the New Zealand's start-up Rexbionics, the developer of a powered lower-limb exoskeleton called Rex that could be used to restore gait after spinal cord injury.

"There is a big push in brain science to understand what exercise does in terms of motor learning or motor retraining of the human brain," says Larry Forrester, an associate professor of physical therapy and rehabilitation science at the University of Maryland School of Medicine.

For the more than a year, Forrester and the UMD team have tracked the neural activity of people on a treadmill doing precise tasks like stepping over dotted lines. The researchers are matching specific brain activity recorded in real time with exact lower-limb movements. They just received a new NIH grant of almost 1 million dollars to support this work, which was originally funded by a small "seed" grant from the University of Maryland, College Park and the University of Maryland, Baltimore.

This data could help stroke victims in several ways, Forrester says. One is a prosthetic device, called an "anklebot," or ankle robot, that stores data from a normal human gait and assists partially paralyzed people. People who are less mobile commonly suffer from other health issues such as obesity, diabetes or cardiovascular problems, Forrester says , "so we want to get [stroke survivors] up and moving by whatever means possible."

The second use of the EEG data in stroke victims is more complex, yet offers exciting possibilities. "By decoding the motion of a normal gait," Contreras-Vidal says, "we can then try and teach stroke victims to think in certain ways and match their own EEG signals with the normal signals." This could "retrain" healthy areas of the brain in what is known as neuroplasticity.

One potential method for retraining comes from one of the Maryland research team's newest members, Steve Graff, a first-year bioengineering doctoral student. He envisions a virtual reality game that matches real EEG data with on-screen characters. "It gives us a way to train someone to think the right thoughts to generate movement from digital avatars. If they can do that, then they can generate thoughts to move a device," says Graff, who brings a unique personal perspective to the work. He has congenital muscular dystrophy and uses a motorized wheelchair. The advances he's working on could allow him to use both hands – to put on a jacket, dial his cell phone or throw a football while operating his chair with his mind.

During the past two decades a great deal of progress has been made in the study of direct brain to computer interfaces, most of it through studies using monkeys with electrodes implanted in their brains. However, for use in humans such an invasive approach poses many problems, not the least of which is that most people don't' want holes in their heads and wires attached to their brains.

"EEG monitoring of the brain, which has a long, safe history for other applications, has been largely ignored by those working on brain-machine interfaces, because it was thought that the human skull blocked too much of the detailed information on brain activity needed to read thoughts about movement and turn those readings into movement commands for multi-functional high-degree of freedom prosthetics," said Contreras-Vidal. He is among the few who have used EEG, MEG or other sensing technologies to develop non-invasive neural interfaces, and the only one to have demonstrated decoding results comparable to those achieved by researchers using implanted electrodes.

A paper Contreras-Vidal and colleagues published in the Journal of Neuroscience in March 2010 showed the feasibility of Maryland's EEG-based technology to infer multidimensional natural movement from noninvasive measurements of brain activity. In their two latest studies, Contreras-Vidal and his team have further advanced the development of their EEG brain interface technology, and provided powerful new evidence that it can yield brain computer interface results as good as or better than those from invasive studies, while also requiring minimal training to use.

In a paper published in April in the Journal of Neural Engineering, the Maryland team demonstrated that people wearing the EEG brain cap, could after minimal training control a computer cursor with their thoughts and achieve performance levels comparable to those by subjects using invasive implanted electrode brain computer interface systems. Contreras-Vidal and his co-authors write that this study also shows that compared to studies of other noninvasive brain control interface systems, training time with their system was substantially shorter, requiring only a single 40-minute session. 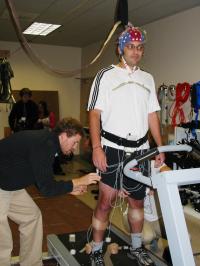