The gallium selenide monolayer has been recently discovered to have an alternative crystal structure and has diverse potential applications in electronics. Understanding its properties is crucial to understand its functions. Now, scientists from the Japan Advanced Institute of Science and Technology and the University of Tokyo have explored its structural stability, electronic states, and transformation of crystal phases.

Solid materials comprise a symmetric arrangement of atoms that confer properties like conductivity, strength, and durability. Changes in size can change this arrangement, thereby changing the overall properties of the material. For instance, the electrical, chemical, optical and mechanical properties of certain materials can change as we move towards the "nano" scale. Science now lets us study the differences in properties across various dimensions right from monolayer (atomic) level.

Gallium selenide (GaSe) is a "layered metal-chalcogenide," which is known to have polytypes, which differ in their stacking sequence of layers, but not a polymorph, which has a different atomic arrangement inside the layer. GaSe has sparked a great deal of interest in areas of physical and chemical research, owing to its potential usage in photoconduction, far-infrared conversion, and optical applications. Conventionally, a GaSe monolayer is composed of gallium (Ga) and selenium (Se) atoms bonded covalently, with the Se atoms projecting outwards, forming a trigonal prism-like structure named "P phase." Part of the same research group had earlier reported a novel crystal phase of GaSe using transmission electron microscopy in Surface and Interface Analysis, wherein the Se atoms are arranged in a trigonal antiprismatic manner to the Ga atoms referred to as "AP phase" with a symmetry different from the conventional P phase (see Picture 1). Because of the novelty of this monolayer structure, very little is known about how it does its "shapeshifting." Moreover, how do variations in the intralayer structure of such compounds affect stability?

To answer this, Mr. Hirokazu Nitta and Prof. Yukiko Yamada-Takamura from the Japan Advanced Institute of Science and Technology (JAIST) explored the structural stability and electronic states of phases of GaSe monolayer using first-principles calculations, in their latest study in Physical Review B.

Hirokazu Nitta explains their study, stating, "We have found out through first-principles calculations that this new phase is metastable, and stability against the ground-state conventional phase reverses upon applying tensile strain, which we think is strongly related to the fact that we saw this phase formed only at the film-substrate interface." The published study is also trending as a #PRBTopDownload on the official Physical Review B handle on Twitter: https://twitter.com/PhysRevB/status/1338837972003811331

To compare the structural stability of the P and AP phases of GaSe, the researchers first calculated the total energy at different in-plane lattice constants, which represent the size of a unit cell in the crystal, given that its structure comprises a "lattice" or organized meshwork of atoms. The lowest energy that corresponds to the most stable state was computed and at this state, the P phase was found to be more stable than the AP phase.

Then, to investigate if the AP and P phases can transform into each other, they determined the "energy barriers" that the material needs to cross to change, and additionally performed molecular dynamics calculations using a supercomputer (see Picture 2). They found the energy barrier for phase transition of P-phase and AP-phase GaSe monolayers is large likely due to the need of breaking and making new bonds, which prohibits direct transition from P to AP phase. The calculations also revealed that the relative stability of P-phase and AP-phase GaSe monolayers can be reversed by applying "tensile strain," or a stretching-type force.

Highlighting the importance and future prospects of their study, Prof. Yamada-Takamura remarks, "Layered chalcogenides are interesting 2D materials after graphene, having wide variety and especially bandgap. We have just found out a new polymorph (not polytype) of a layered monochalcogenide. Its physical as well as chemical properties are yet to be discovered."

Together, the findings of this study describe the electronic structure of a less-known structure of GaSe that can provide insights into the behavior of similar epitaxially grown monolayers, revealing yet another secret about the unknown family members of GaSe and related monochalcogenides.

About Professor Yukiko Yamada-Takamura from Japan Advanced Institute of Science and Technology, Japan

Dr. Yukiko Yamada-Takamura is a Professor in the School of Materials Science at the Japan Advanced Institute of Science and Technology (JAIST), Japan, since 2020. She received her PhD from the University of Tokyo in 1998. She was a research associate at Tohoku University from 2002-2006. She joined JAIST as a lecturer in 2006. She specializes in material fabrication and microstructure control, nanostructure physics and nanomaterials. Her research interest lies in thin films, 2D materials, and cutting-edge microscopies. 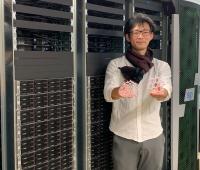