Researchers at the Technical University of Madrid (UPM, Spain) have created "shadow models" and a type of software that calculates the amount of solar radiation that reaches streets and buildings in high resolution. According to the results published in the Research Journal of Chemistry and Environment, they could help to optimise the energy consumption of cities.

"Solar radiation that falls on a certain point in the city varies depending on the time of day, the weather conditions, the pollution level and other variables," explains Roberto San José, lecturer at the Technical University of Madrid (UPM). He adds, "what we have done is calculate radiation using supercomputers that simulate the vast amount of data involved in the entire atmospheric process."

The method involves throwing up to 100,000 rays of light for just a few seconds from any position and verifying the point of collision upon reaching obstacles. Calculations are so complex that they have required the powerful machines of the Supercomputing and Visualization Center of Madrid (CEsViMa-UPM) and the Mare Nostrum supercomputer at the Barcelona Supercomputing Center to work for 72 hours in order to achieve just 6 seconds of light and shadow evolution for an area of Madrid, Spain.

In order to carry out the study, which was published in the Research Journal of Chemistry and Environment, global meteorological data provided by the USA's National Center for Atmospheric Research has been taken. Information applying to Europe and Spain was taken from this data before homing in on a more local level. The starting point of the whole process lies in an open source of geophysical research called EULAG.

The researchers have conceived two mathematical "shadow" models in which the first supplies data to the second. One shows highly detailed, 3D images of the behaviour of radiation while the other reveals the exchange of energy that occurs in a selected area. Urban morphology plays a crucial role in the energy balance.

San José explains that "depending on urban layout, at a certain time of day there will be rays of light that collide with the tarmac, the pavement and other buildings. They are then successively reflected until they create different degrees of shadow on the surface."

The team has set up their two models in an IT tool named SHAMO (SHAdow MOdel), a software that allows for shadows and solar radiation in any city to be quantified. In particular, cubic areas with a base of 1 km x 1 km and a height of 400 m are analysed with a resolution of 4 m.

The energy optimisation of a city

San José states that "the results can serve as a tool for sustainability and energy optimisation in cities from both an architectural (a shaded building requires more internal heating that a building in the sun) and urban planning point of view. In this sense, results can be used in the search for harmony between human and natural energy consumption."

The researcher exemplifies this: "The heating is often turned on during the day and turned off at the night but in some cases could be the other way around. For instance, sometimes the amount of solar radiation that reaches a building is enough to keep in the warmth that has accumulated from the heating being on during the night."

This study forms part of the European BRIDGE Project on urban metabolism, a concept that perceives the city as a living organism in search for a sustainable energy balance. The department of urban planning at Madrid City Council has already expressed their interest in the tool.

The shadows in a city reveal its energy flow 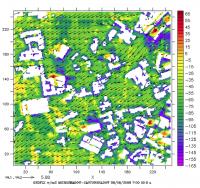