Researchers at IIT-Istituto Italiano di Tecnologia completed the realization, assembly and testing of a new disaster response robot: the Centauro, a Centaur-like robot consisting of a four-legged base and an anthropomorphic upper body. The robot is capable of performing robust locomotion, high strength manipulation and harsh interactions that may be necessary during the execution of disaster relief tasks. Centauro robot is 1.5 m tall, while its shoulder width is 65 cm and its weight is 93 Kg. It is made of Aluminium, Magnesium and Titanium Alloys, while cover parts are made from plastic using rapid prototyping fabrication. It is battery powered and it can operate for 2.5 hours.

The development of the robot is within the framework of the research project Centauro funded by the European Commission and coordinated by University of Bonn in Germany. The robot hardware, its software architecture and whole body control framework were completely designed and realized at IIT-Istituto Italiano di Tecnologia in Italy, by the Humanoid and Human Centred Mechatronics Lab coordinated by Nikos Tsagarakis.

The Centauro project aims at the realization of a robotic platform to be used in disaster scenarios, and assist rescue workers to execute emergencies tasks is hostile environments in a safe way. The Centauro robot is therefore designed to navigate in affected man-made environments, thanks to its hybrid mobility skills that combine legged articulated locomotion and wheeled mobility. Its body has dimensions compatible to those needed to operate within human infrastructures, it can pass through doors and narrow corridors, and perform steps in standard stairs.

The mobility, manipulation and whole body control skills of the robot have been recently validated in different tasks, such as the manipulation of heavy objects and the breaking of wood pieces.

Centauro legs incorporate six degrees of freedom, that is they can realize articulated movements in the environment, by rotating and extending hips, knees and ankles, and control the wheel modules, which are placed at the ankles like rolling "hoofs". The robot can adopt different configurations, such as the typical leg configurations of quadruped robots including both inward and outward knee arrangements, and a spider leg configuration, which can be more beneficial in terms of stability required for manipulating powerful tools. Wheels allow the robot to demonstrate also wheeled based mobility in addition to the articulated locomotion. The wheel is made of an aluminium alloy and its outer layer is over-moulded with an elastomer material, thereby ensuring visco-damped contacts while generating suitable friction when rolling on the ground surfaces.

The Centauro robot is capable of using human tools to execute manipulation tasks and can demonstrate manipulation strength capacity that is higher than that of the typical human adult. Its lightweight (10.5kg) arms demonstrate a payload to weight ratio greater than 1:1; thus, the payload capacity of the single arm is approximately 11 Kg. Furthermore, its high performance and impact resilient actuation system permits the robot to perform manipulations tasks that requires severe physical interactions without the risk of physical damages to robot components.

The robot perception system is located in the head and incorporates a series of sensors including a set of cameras, RGBD sensors and a Lidar scanner which provide a spherical coverage of the environment around the robot. In addition, the robot joints incorporate high fidelity torque sensing and thermal state monitoring sensors.

The robot is equipped with computation power delivered by three on board computers dedicated to hard real time control, high level motion planning and perception processing respectively. The robot control and the data exchange in this distributed computation system is coordinated by the software framework developed by the same IIT team.

The robot is powered by an onboard high power density 1.6KWh Li-Po battery, which permits uninterrupted operation for approximately 2.5 hours. 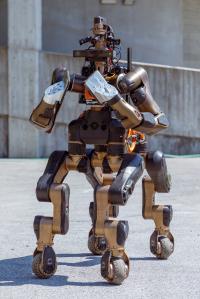 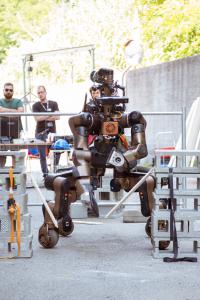 The Centauro Robot -- in Action