For the first time, scientists have successfully teleported information between two separate atoms in unconnected enclosures a meter apart – a significant milestone in the global quest for practical quantum information processing.

Teleportation may be nature's most mysterious form of transport: Quantum information, such as the spin of a particle or the polarization of a photon, is transferred from one place to another, without traveling through any physical medium. It has previously been achieved between photons over very large distances, between photons and ensembles of atoms, and between two nearby atoms through the intermediary action of a third. None of those, however, provides a feasible means of holding and managing quantum information over long distances.

Now a team from the Joint Quantum Institute (JQI) at the University of Maryland (UMD) and the University of Michigan has succeeded in teleporting a quantum state directly from one atom to another over a substantial distance. That capability is necessary for workable quantum information systems because they will require memory storage at both the sending and receiving ends of the transmission.

In the Jan. 23 issue of the journal Science, the scientists report that, by using their protocol, atom-to-atom teleported information can be recovered with perfect accuracy about 90% of the time – and that figure can be improved.

"Our system has the potential to form the basis for a large-scale 'quantum repeater' that can network quantum memories over vast distances," says group leader Christopher Monroe of JQI and UMD. "Moreover, our methods can be used in conjunction with quantum bit operations to create a key component needed for quantum computation." A quantum computer could perform certain tasks, such as encryption-related calculations and searches of giant databases, considerably faster than conventional machines. The effort to devise a working model is a matter of intense interest worldwide.

Teleportation works because of a remarkable quantum phenomenon, called "entanglement," which only occurs on the atomic and subatomic scale. Once two objects are put in an entangled state, their properties are inextricably entwined. Although those properties are inherently unknowable until a measurement is made, measuring either one of the objects instantly determines the characteristics of the other, no matter how far apart they are.

The JQI team set out to entangle the quantum states of two individual ytterbium ions so that information embodied in the condition of one could be teleported to the other. Each ion was isolated in a separate high-vacuum trap, suspended in an invisible cage of electromagnetic fields and surrounded by metal electrodes. [See illustrations.] The researchers identified two readily discernible ground (lowest energy) states of the ions that would serve as the alternative "bit" values of an atomic quantum bit, or qubit.

Conventional electronic bits (short for binary digits), such as those in a personal computer, are always in one of two states: off or on, 0 or 1, high or low voltage, etc. Quantum bits, however, can be in some combination, called a "superposition," of both states at the same time, like a coin that is simultaneously heads and tails – until a measurement is made. It is this phenomenon that gives quantum computation its extraordinary power.

At the start of the experimental process, each ion (designated A and B) is initialized in a given ground state. Then ion A is irradiated with a specially tailored microwave burst from one of its cage electrodes, placing the ion in some desired superposition of the two qubit states – in effect writing into memory the information to be teleported.

Immediately thereafter, both ions are excited by a picosecond (one trillionth of a second) laser pulse. The pulse duration is so short that each ion emits only a single photon as it sheds the energy gained from the laser pulse and falls back to one or the other of the two qubit ground states. Depending on which one it falls into, each ion emits a photon whose color (designated red and blue) is perfectly correlated with the two atomic qubit states. It is this entanglement between each atomic qubit and its photon that will eventually allow the atoms themselves to become entangled.

The emitted photons are captured by lenses, routed to separate strands of fiber-optic cable, and carried into opposite sides of a 50-50 beamsplitter where it is equally probable for either photon to pass straight through the splitter or to be reflected. On either side of the beamsplitter output are detectors that can record the arrival of a single photon.

Before reaching the beamsplitter, each photon is in a superposition of states. After encountering the beamsplitter, four color combinations are possible: blue-blue, red-red, blue-red and red-blue. In nearly all of those variations, the photons cancel each other out on one side and both end up in the same detector on the other side. But there is one – and only one – combination in which both detectors will record a photon at exactly the same time.

In that case, however, it is physically impossible to tell which ion produced which photon because it cannot be known whether the photon arriving at a detector passed through the beamsplitter or was reflected by it.

Thanks to the peculiar laws of quantum mechanics, that inherent uncertainty projects the ions into an entangled state. That is, each ion is in a correlated superposition of the two possible qubit states. The simultaneous detection of photons at the detectors does not occur often, so the laser stimulus and photon emission process has to be repeated many thousands of times per second. But when a photon appears in each detector, it is an unambiguous signature of entanglement between the ions.

When an entangled condition is identified, the scientists immediately take a measurement of ion A. The act of measurement forces it out of superposition and into a definite condition: one of the two qubit states. But because ion A's state is irreversibly tied to ion B's, the measurement of A also forces B into a complementary state. Depending on which state ion A is found in, the researchers now know precisely what kind of microwave pulse to apply to ion B in order to recover the exact information that had originally been stored in ion A. Doing so results in the accurate teleportation of the information.

What distinguishes this outcome as teleportation, rather than any other form of communication, is that no information pertaining to the original memory actually passes between ion A and ion B. Instead, the information disappears when ion A is measured and reappears when the microwave pulse is applied to ion B.

"One particularly attractive aspect of our method is that it combines the unique advantages of both photons and atoms," says Monroe. "Photons are ideal for transferring information fast over long distances, whereas atoms offer a valuable medium for long-lived quantum memory. The combination represents an attractive architecture for a 'quantum repeater,' that would allow quantum information to be communicated over much larger distances than can be done with just photons. Also, the teleportation of quantum information in this way could form the basis of a new type of quantum internet that could outperform any conventional type of classical network for certain tasks."

An additional image can be viewed here.

The Joint Quantum Institute is a partnership effort between the National Institute of Standards and Technology and UMD, with additional support from the Laboratory for Physical Science. The work reported in Science was supported by the Intelligence Advanced Research Project Activity program under U.S. Army Research Office contract, the National Science Foundation (NSF) Physics at the Information Frontier Program, and the NSF Physics Frontier Center at JQI. 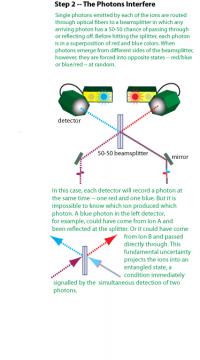