Scientists have equipped a virus that kills carcinoma cells with a protein so it can also target and kill adjacent cells that are tricked into shielding the cancer from the immune system.

It is the first time that cancer-associated fibroblasts within solid tumours - healthy cells that are tricked into protecting the cancer from the immune system and supplying it with growth factors and nutrients - have been specifically targeted in this way.

The researchers, who were primarily funded by the Medical Research Council (MRC) and Cancer Research UK, say that if further safety testing is successful, the dual-action virus - which they have tested in human cancer samples and in mice - could be tested in humans with carcinomas as early as next year.

Currently, any therapy that kills the 'tricked' fibroblast cells may also kill fibroblasts throughout the body - for example in the bone marrow and skin - causing toxicity.

In this study, published in the journal Cancer Research, the researchers used a virus called enadenotucirev, which is already in clinical trials for treating carcinomas. It has been bred to infect only cancer cells, leaving healthy cells alone.

They added genetic instructions into the virus that caused infected cancer cells to produce a protein called a bispecific T-cell engager.

The protein was designed to bind to two types of cells and stick them together. In this case, one end was targeted to bind to fibroblasts. The other end specifically stuck to T cells - a type of immune cell that is responsible for killing defective cells. This triggered the T cells to kill the attached fibroblasts.

Dr Joshua Freedman, from the Department of Oncology at the University of Oxford, who was first author on the study said: "We hijacked the virus's machinery so the T-cell engager would be made only in infected cancer cells and nowhere else in the body. The T-cell engager molecule is so powerful that it can activate immune cells inside the tumour, which are being supressed by the cancer, to attack the fibroblasts."

Dr Kerry Fisher, from the Department of Oncology at the University of Oxford, who led the research said: "Even when most of the cancer cells in a carcinoma are killed, fibroblasts can protect the residual cancer cells and help them to recover and flourish. Until now, there has not been any way to kill both cancer cells and the fibroblasts protecting them at the same time, without harming the rest of the body.

"Our new technique to simultaneously target the fibroblasts while killing cancer cells with the virus could be an important step towards reducing immune system suppression within carcinomas and should kick-start the normal immune process.

"These viruses are already undergoing trials in people, so we hope our modified virus will be moving towards clinical trials as early as next year to find out if it is safe and effective in people with cancer."

The scientists successfully tested the therapy on fresh human cancer samples collected from consenting patients, including solid prostate cancer tumours which reflect the complex make-up of real tumours. They also tested the virus on samples of healthy human bone marrow and found it did not cause toxicity or inappropriate T cell activation.

Dr Nathan Richardson, head of molecular and cellular medicine at the MRC said: "Immunotherapy is emerging as an exciting new approach to treating cancers. This innovative viral delivery system, which targets both the cancer and surrounding protective tissue, could improve outcomes for patients whose cancers are resistant to current treatments. Further clinical studies will be crucial to determine that the stimulation of the patient's immune system does not produce unintended consequences".

Dr Michelle Lockley, Cancer Research UK's expert on immunotherapy, said: "Using the power of the body's own immune system to tackle cancer is a growing area of research. This work in human tumour samples is encouraging, but can be complicated - one of the biggest challenges of immunotherapies is predicting how well they will work with the patient's immune system, and understanding what the side effects could be. The next stage will be using clinical trials to test whether this is both a safe and effective way to treat the disease in people."

The virus targets carcinomas, which are the most common type of cancer and start in cells in the skin or in tissues that line or cover internal organs, such as the pancreas, colon, lungs, breasts, ovaries and prostate. 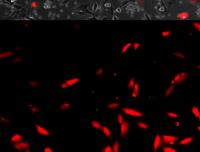