Tropical Cyclone Yasi has continued moving through inland Queensland, Australia and has weakened to a tropical depression today. NASA and JAXA's TRMM satellite passed over Yasi as it continued to drop moderate to heavy rainfall.

Just 39 minutes after the position of Yasi's center was determined, the Tropical Rainfall Measuring Mission (TRMM) satellite flew above the cyclone at 0339 UTC (Feb. 2 at 10:39 p.m. EST/1:39 p.m. Australia local time) collecting data on rainfall rates. Yasi had weakened to tropical storm strength but TRMM Microwave Imager (TMI) and Precipitation Radar (PR) data reveal that the storm was still dropping moderate to heavy rain over Australia in an area southeast of the Gulf of Carpentaria.

Just about an hour later, another NASA satellite passed over Yasi capturing the massive size of the strom in a visible image. The Moderate Resolution Imaging Spectroradiometer (MODIS) instrument that flies onboard NASA's Aqua satellite captured data on Yasi at 04:15 UTC (Feb. 2 at 11:15 p.m. EST/2:15 p.m. Australia local time. The center of Yasi had already moved inland and the eye of the storm had become obscured by clouds.

The Australia Bureau of Meteorology (ABoM) website has been updating residents of Yasi's movement and affects. To see the ABoM's radar, visit: http://www.bom.gov.au/products/national_radar_sat.loop.shtml.

At 9:30 a.m. EST (14:30 UTC) on Feb. 3 (or 12:30 a.m. Australia local time on Feb. 4) Yasi was approaching the border of the Northern Territory and had weakened into a tropical depression. The ABoM noted that isolated thunderstorms, heavy rains, flash flooding and damaging winds with gusts greater than 48 knots (55 mph/90 kmh) are possible in the western interior of Queensland. Updates from the ABoM can be found at: www.bom.gov.au. 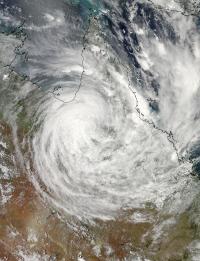