A postgraduate student from the University of Bristol is the joint recipient of five separate awards in recognition of their world record achievement in 5G wireless spectrum efficiency using Massive MIMO. The announcement was made at the 22nd annual NIWeek conference in Austin, Texas, USA, at the National Instruments (NI) Engineering Impact Awards ceremony last night.

Paul Harris, from the University's EPSRC Centre for Doctoral Training (CDT) in Communications together with Steffen Malkowsky, from the University of Lund in Sweden, won NI's Wireless and Mobile Communications category together with NI's Engineering Grand Challenges Award, Hewlett Packard Enterprise (HPE) Edgeline Big Analog Data Award, Powered by Xilinx Award, and the 2016 Customer Application of the Year Award.

In the 2016 NI Engineering Impact Awards - an annual set of awards that showcase extraordinary and innovative projects - over 100 entries were submitted, which were narrowed down to 14 finalists in seven specialisations. From these shortlists the winner was selected in each individual category. A further nine additional awards were presented, including NI Global Student Design Showcase, NI Community's Choice, HPE Edgeline Big Analog Data, Intel Internet of Things, Powered by Xilinx, Engineering Grand Challenges, Humanitarian, Innovations in STEM and the 2016 Customer Application of the Year.

Paul and Steffen used a 128-antenna massive MIMO testbed to demonstrate simultaneous real-time wireless connectivity to multiple users in the same radio channel through a technique known as spatial multiplexing. In their April submission they described how 12 users could be simultaneously connected using a single 20MHz channel at 3.5GHz. They achieved an aggregate data rate of 1.59 Gbps and set a new world record in wireless spectrum efficiency of 79.4bit/s/Hz.

In May, Bristol and Lund supported 22 simultaneous users and smashed through the 100 bit/s/Hz barrier; eventually setting a new world record of 145.6 bit/s/Hz.

The research team's achievement with massive MIMO arrays, which are cellular base stations with more than 100 antennas, demonstrates that this technology could deliver ultra-fast data rates to high densities of smartphones and tablets. Massive MIMO is a key technology for 5G, the next generation of wireless access.

The hardware behind this demonstration was provided to the University as part of Bristol Is Open, a joint venture with Bristol City Council that aims to become the world's first Open Programmable City. The team used a NI flexible prototyping platform based on LabVIEW system design software and PXI hardware.

Spectrum and power efficient wireless communications are core to the University of Bristol's Communication Systems & Networks (CSN) Research Group as well as the EPSRC CDT in Communications and the Department of Electrical and Information Technology at Lund University.

Mark Beach, Professor of Radio Systems Engineering in the Department of Electrical and Electronic Engineering and Manager of the EPSRC Centre for Doctoral Training (CDT) in Communications, said: "We're justifiably proud of Paul and Steffen and these awards truly exemplifies both their technical contributions to the field of Massive MIMO 5G wireless spectral efficiency and our collaborations with European universities and the NI engineering team in the US."

Today [Wednesday 3 August], as part of the NIWeek conference, Professor Andrew Nix, Dean of Engineering and Head of the CSN research group, took to the NI stage as part of a keynote presentation entitled '5G: What's the Big Deal?' This event attracted more than 3,200 innovators, with thousands more watching around the world on a live stream.

Professor Andrew Nix said: "The demands for mobile data are increasing exponentially and operators are struggling to keep up. In the sub 6GHz bands, Massive MIMO is the 5G technology of choice. By breaking the work spectral efficiency record twice, compared to 4G we've managed to demonstrate an order of magnitude increase in spectral efficiency." 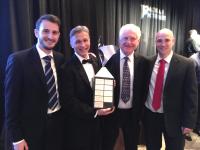