Little is known about azhdarchid pterosaurs, gigantic flying reptiles with impressive wingspans of up to 12 meters. Cousins of dinosaurs and the largest animals ever to fly, they first appeared in the fossil record in the Late Triassic about 225 million years ago and disappeared again at the end of the Cretaceous period about 66 million years ago. One of their most notable features for such a large flighted animal was a neck longer than that of a giraffe. Now, researchers report an unexpected discovery in the journal iScience on April 14: their thin neck vertebrae got their strength from an intricate internal structure unlike anything that's been seen before.

"One of our most important findings is the arrangement of cross-struts within the vertebral centrum," says Dave Martill of the University of Portsmouth, UK. "It is unlike anything seen previously in a vertebra of any animal. The neural tube is placed centrally within the vertebra and is connected to the external wall via a number of thin rod-like trabeculae, radially arranged like the spokes of a bicycle wheel and helically arranged along the length of the vertebra. They even cross over like the spokes of a bicycle wheel. Evolution shaped these creatures into awesome, breathtakingly efficient flyers."

Scientists previously thought the pterosaur's neck had a simpler tube-within-a-tube structure, he explains. But it raised an important question: how could their thin-walled bones, needed to reduce weight in the flying reptiles, still support their bodies and allow them to capture and eat heavy prey animals?

Cariad Williams, the study's first author, hadn't set out to answer that question. She wanted to examine the degree of movement between each vertebra of the pterosaur's neck.

"These animals have ridiculously long necks," Williams says, adding that, in some species, the fifth vertebra of the neck from the head end is as long as the animal's body. "It makes a giraffe look perfectly normal. We wanted to know a bit about how this incredibly long neck functioned, as it seems to have very little mobility between each vertebra."

While the Moroccan pterosaur bones they study are well preserved in three dimensions, the researchers still hadn't expected the scans to offer such a clear view of the vertebra's intricate internal structure.

"We did not originally CT scan it to learn about the inside; we wanted a very detailed image of the outside surface," Martill says. "We could have got this by ordinary surface scanning, but we had an opportunity to put some specimens in a CT scanner, and it seemed churlish to turn the offer down. We were simply trying to model the degree of movement between all the vertebrae to see how the neck might perform in life."

He adds, "What was utterly remarkable was that the internal structure was perfectly preserved--so too was the microhistology when we made some petrographic sections through the bone. As soon as we saw the intricate pattern of radial trabeculae, we realized there was something special going on. As we looked closer, we could see that they were arranged in a helix traveling up and down the vertebral tube and crossing each other like bicycle wheel spokes."

His team realized immediately that they needed to bring in engineers to understand how the biomechanics of this unusual neck would have worked. Those analyses suggest that as few as 50 of the spoke-like trabeculae increased the amount of weight their necks could carry without buckling by 90%. Together with the basic tube-within-a-tube structure, it explains how the relatively light-weight animals could capture and carry heavy prey items without breaking their necks.

"It appears that this structure of extremely thin cervical vertebrae and added helically arranged cross-struts resolved many concerns about the biomechanics of how these creatures were able to support massive heads--longer than 1.5 meters--on necks longer than the modern-day giraffe, all whilst retaining the ability of powered flight," Martill says.

While pterosaurs are sometimes thought of as evolutionary dead ends, Martill and colleagues say the new findings reveal them as "fantastically complex and sophisticated." Their bones and skeletons were marvels of biology--extremely light yet strong and durable.

The researchers say there's still much to learn in future work about pterosaurs, including seemingly basic questions about their flight abilities and feeding ecology. 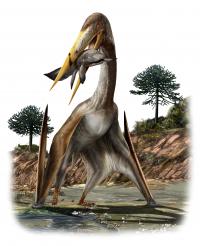 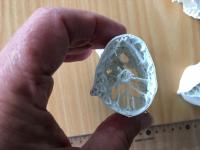