January 29, 2015 (Washington) - Despite similar views about the overall place of science in America, the general public and scientists often see science-related issues through a different lens, according to a new pair of surveys by the Pew Research Center in collaboration with the American Association for the Advancement of Science (AAAS).

The report finds significant differences in views on 13 science-related issues asked about in the surveys. For instance, there is a:

"Science is a huge, sprawling cluster of subjects. We knew from the 2009 Pew Research Center study that there could be differences between the public and scientists on at least some issues. But we were surprised by the size of those differences and how often they occur," said Cary Funk, lead author of the report and associate director of science research at Pew Research Center.

There is agreement between the public and scientists on one core issue: Both groups believe that science, technology, engineering and math education (STEM) in America's elementary and secondary schools is not performing well. Only 16% of AAAS scientists and 29% of the general public rank U.S. K-12 STEM education as above average or the best in the world. And three-quarters of AAAS scientists say too little STEM education is a major factor in the public's limited knowledge about science--which an overwhelming majority of scientists see as a problem for science in general.

"Whatever their disagreements, most in the public and science community see STEM education as a concern," said Lee Rainie, co-author and Pew Research Center director of internet, science and technology research. "When both groups basically speak in the same voice about an issue, it is worth paying attention."

These surveys find that science holds an esteemed place among citizens and professionals, but both groups are less upbeat about the scientific enterprise than they were in 2009 when the Pew Research Center conducted similar surveys.

"While the public is still broadly positive about the contributions of science to society, there has been a slight rise in negative views across a number of measures, suggesting some softening in the perceived value of science to society. These patterns will be important to watch over time," Funk said.

Some other key findings:

These are some of the findings from a new pair of surveys conducted by the Pew Research Center in collaboration with the AAAS. The survey of the general public was conducted using a probability-based sample of the adult population by landline and cellular telephone Aug. 15-25, 2014, with a representative sample of 2,002 adults nationwide. The margin of sampling error for results based on all adults is plus or minus 3.1 percentage points. The survey of scientists is based on a representative sample of 3,748 U.S.-based members of AAAS; the survey was conducted online from Sept. 11 to Oct. 13, 2014. This report is the beginning of Pew Research Center's increased focus on science and society research. Several more reports on this topic will be released in the coming year.

"The publication of this report begins a major new initiative for the Pew Research Center," said Michael Dimock, president of the center. "The center has covered science-related issues in the past, but this marks our more formal commitment to studying the intersection of science with public life. There is considerable interest in the policy community, among scientists themselves, and among engaged citizens to understand how the fast-paced world of scientific inquiry and innovation is shaping our world. We hope to explore that and to understand more fully how news and information about scientific activities makes their way to citizens, how they understand it, and how, in some circumstances, they contribute to it."

These findings will be available at http://www.pewresearch.org/science2015/

Explore the data about those differences in an interactive topline, which will be available at http://pewrsr.ch/1yJTHDh at 2 p.m. ET on Thursday, January 29. The interactive will also include embed code so it can be included on your site.

For more information or to arrange an interview, please contact Dana Page at 202.419.4372 or dpage@pewresearch.org.

Pew Research Center is a nonpartisan fact tank that informs the public about the issues, attitudes and trends shaping America and the world. It does not take policy positions.

The American Association for the Advancement of Science (AAAS) is the world's largest general scientific society and publisher of the Science family of journals. The non-profit AAAS, founded in 1848, is open to all and fulfills its mission to "advance science and serve society" through initiatives in science policy, international programs, science education, public engagement, and more. 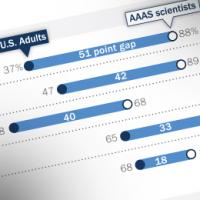