Do plants operate according to economic criteria? They do, when they are mutualized with fungal partners that demonstrate differing degrees of cooperation. "Carbs for phosphates", that's the deal between plants and mycorrhizal fungi, which can only feed themselves together with a partner: The plant supplies the fungus with carbohydrates and is 'paid back' in phosphates. Additional phosphates are extremely attractive for the plant, as they allow it to grow better.

It really gets interesting when plants are mutualized with fungal partners of varying degrees of cooperativeness: a 'meaner' one, which supplies fewer phosphates per unit of carbohydrate provided, and a 'more generous' one, which 'pays' more phosphates for its nutrients. "In a case like this, the plant can deliberately decide to provide the meaner partner with fewer carbohydrates." That's how ecologists Pascal Niklaus and Bernhard Schmid from the University of Zurich sum up the results of their new study. As if that were not enough, the plant can practically 'starve' the less cooperative fungal partner by supplying it with fewer nutrients, thus forcing it to supply more of the sought-after phosphates. In this way the partner is encouraged to give back around the same amount as the more generous fungus. Andres Wiemken from the University of Basel explains this phenomenon as follows: "The plant exploits the competitive situation of the two fungi in a targeted manner, triggering what is essentially a market-based process determined by cost and performance".

Based on this completely new insight into the behavior and decision-making ability of plants, the researchers believe that plants would be suitable for testing general market-based theories. "Because plants make their decisions based on physiological processes and are not distracted from the best course of action by subjective thought, they could even be better models than animals and people", says Bernhard Schmid from the University of Zurich.

Better productivity thanks to mycorrhizal fungi

The basic research funded by Syngenta within the framework of the "Plant Decision Making" Project at the Zurich-Basel Plant Science Center also provides practical findings for the agriculture sector. "Mycorrhizal fungi increase the sustainability and productivity of agricultural eco-systems", explains Bernhard Schmid. For this reason, it is essential to maintain as much diversity within mycorrhizal fungi as possible in the agriculture sector going forward.

Mycorrhizal fungi can survive only in the presence of a plant partner, as they are not able to feed themselves. The fungus uses its hyphae to penetrate the plant's root system, where the plant supplies it with carbohydrates. The plant also benefits from this arrangement, as the fungus provides the plant with phosphates and other nutrients - with varying degrees of generosity. These natural fertilizers are decisive for plant growth, so mutualism with the mychorrhizal fungus is beneficial even if the fungus does not always cooperate fully.

Plant and mychorrhizal fungus mutualism has existed globally for more than 400 million years. Plant-fungus systems like these will play a significant role in more sustainable agriculture in the future. 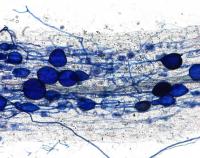