Grenoble, 5 June 2013: An international team of researchers has announced the discovery of the world's oldest known fossil primate skeleton representing a previously unknown genus and species named Archicebus achilles. The fossil was unearthed from an ancient lake bed in central China's Hubei Province, near the course of the modern Yangtze River. In addition to being the oldest known example of an early primate skeleton, the new fossil is crucial in elucidating a pivotal event in primate and human evolution—the evolutionary divergence that led to modern monkeys, apes and humans (collectively known as anthropoids) on one branch, and to living tarsiers on the other. The scientific paper describing the discovery is published today in the prestigious journal Nature.

The fossil was recovered from sedimentary rock strata that were deposited in an ancient lake roughly 55 million years ago, during the early part of the Eocene Epoch. This was an interval of global "greenhouse" conditions, when much of the world was shrouded in tropical rainforests and palm trees grew as far north as Alaska. Like most other fossils recovered from ancient lake strata, the skeleton of Archicebus was found by splitting apart the thin layers of rock containing the fossil. As a result, the skeleton of Archicebus is now preserved in two complementary pieces called a "part" and a "counterpart," each of which contain elements of the actual skeleton as well as impressions of bones from the other side.

The international team of scientists who studied the skeleton of Archicebus was led by Dr. Xijun Ni of the Institute of Vertebrate Paleontology and Paleoanthropology (IVPP) at the Chinese Academy of Sciences in Beijing. Ni's collaborators include Dr. Christopher Beard of the Carnegie Museum of Natural History in Pittsburgh; Dr. Daniel Gebo of Northern Illinois University; Dr. Marian Dagosto of Northwestern University in Chicago; Dr. Jin Meng and Dr. John Flynn of the American Museum of Natural History in New York; and Dr. Paul Tafforeau of the European Synchrotron Radiation Facility (ESRF) in Grenoble, France.

In order to study the entire fossil, the scientific team first digitally scanned it with X-rays to the highest possible resolution, at the European Synchrotron Radiation Facility (ESRF) in Grenoble, France. Three-dimensional digital reconstruction of the fossil using these synchrotron scans allowed the team of scientists to study the tiny, fragile skeleton of Archicebus in intricate detail. "For several years the ESRF has developed imaging facilities enabling us to non-destructively study fossils still buried in rock with a level of details and contrast unique in the world, or to reveal microstructures that would normally require partial destruction of the specimens. Three-dimensional scans allow us to virtually make the skeleton "stand up"," said Dr. Paul Tafforeau, a palaeoanthropologist and leading figure in the use of synchrotron X-rays for palaeontological applications.

The skeleton of Archicebus is about 7 million years older than the oldest fossil primate skeletons known previously, which include Darwinius from Messel in Germany and Notharctus from the Bridger Basin in Wyoming. Furthermore, Archicebus belongs to an entirely separate branch of the primate evolutionary tree that lies much closer to the lineage leading to modern monkeys, apes and humans. Darwinius and Notharctus, on the other hand, are adapiform primates that are early relatives of living lemurs, the most distant branch of the primate family tree with respect to humans and other anthropoids. According to Dr. Ni, "Archicebus marks the first time that we have a reasonably complete picture of a primate close to the divergence between tarsiers and anthropoids. It represents a big step forward in our efforts to chart the course of the earliest phases of primate and human evolution."

"Archicebus differs radically from any other primate, living or fossil, known to science. It looks like an odd hybrid with the feet of a small monkey, the arms, legs and teeth of a very primitive primate, and a primitive skull bearing surprisingly small eyes. It will force us to rewrite how the anthropoid lineage evolved." says Dr. Christopher Beard, whose earlier work on Eosimias and other fossil primates from China and Myanmar has placed Asia at the centre of early primate evolution.

Statistical analyses aimed at reconstructing how much an adult Archicebus would have weighed in life show that it was slightly smaller than the smallest living primates, which are pygmy mouse lemurs from Madagascar. Archicebus would have weighed about 20-30 grams (~ 1 ounce). "The tiny size and very basal evolutionary position of Archicebus support the idea that the earliest primates, as well as the common ancestor of tarsiers and anthropoids, was miniscule. This overturns earlier ideas suggesting that the earliest members of the anthropoid lineage were quite large, the size of modern monkeys," says Dr. Daniel Gebo, an expert on the evolution of body anatomy in primates.

Dr. Marian Dagosto notes that, "Even though Archicebus appears to be a very basal member of the tarsier lineage, it resembles early anthropoids in several features, including its small eyes and monkey-like feet. It suggests that the common ancestor of tarsiers and anthropoids was in some ways more similar than most scientists have thought."

The evolutionary relationships among primates and their potential relatives, and among the major lineages within the Primate order have been debated intensively for many years. "To test these different hypotheses and determine the phylogenetic position of the new primate, we developed a massive data matrix including more than 1000 anatomical characters and scored for 157 mammals," says Dr. Jin Meng.

"People may see this simply as another discovery of a well preserved fossil, but to reveal the remarkable secrets that have been hidden in the rock for millions of years, we undertook extensive work, applied state-of-the-art technology, and intensive international cooperation took place behind the scenes at several museums. It took us ten years", adds Dr. John Flynn, Dean of the Richard Gilder Graduate School and Curator of the American Museum of Natural History.

Discovery of oldest primate skeleton, ancestor of humans and apes 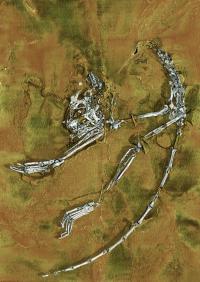 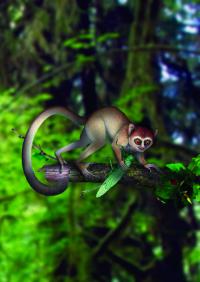 The Earliest Primate in its Habitat