Our DNA determines a lot about who we are and how we play with others, but recent studies of social animals (birds and bees, among others) show that the interaction between genes and behavior is more of a two-way street than most of us realize.

Genes in the brain are malleable, turning on or off in response to internal and external cues. While genetic variation influences brain function and social behavior, the authors write, social information also alters gene expression in the brain to influence behavior.

Thanks to the newly sequenced genomes of several social animals, including honey bees and zebra finches, and new technologies such as microarrays (which allow researchers to glimpse the activity of thousands of genes at a time) neuroscientists are gradually coming to understand that "there is a dynamic relationship between genes and behavior," Robinson said. "Behavior is not etched in the DNA."

A critical insight came in 1992, in a study of songbirds led by David Clayton. He and his colleagues found that expression of a specific gene increases in the forebrain of a zebra finch or canary just after it hears a new song from a male of the same species. This gene, egr1, codes for a protein that itself regulates the expression of other genes.

The finding was not unprecedented; previous studies had shown that genes switch on and off when an animal is trained to perform a task in the laboratory, Robinson said.

But when Clayton's team found this change in gene expression in response to a social signal – a song from a potential competitor, something the bird would likely hear in nature – it drew attention to how powerfully social interactions can alter gene expression in the brain.

"What's more significant to a bird than hearing another bird singing?" Clayton said. "This is going on in the equivalent of our auditory cortex and association cortex, so this is pretty high-level stuff going on in the brain. And this was happening in more or less real time by very naturalistic stimuli."

Reading Clayton's 1992 paper "was a eureka moment for me," Robinson said.

"This just brought it out into the social world, saying that this occurred in animals that have to make a living in the real world and pay attention to a lot of nuanced stimuli," he said. "So I think that was really a very important step in our understanding."

In his own work, Robinson has used microarrays to study this phenomenon on a larger scale and has found that literally thousands of genes turn on or off in the honey bee brain in response to social stimuli. One such gene, called for (for foraging), was originally discovered in fruit flies by Marla Sokolowski at the University of Toronto. Flies that carry different versions of for show different types of foraging behavior. Each version gives its bearer a behavioral advantage in certain environmental conditions.

Robinson knew that honey bee workers start out working in the hive as nurses and only later graduate to the role of foragers. Perhaps, he reasoned, even though the differences in for are etched in the DNA in flies, this same gene in the bee might be more dynamic and help influence the transition from hive work to foraging.

In a study published in 2002, Robinson and his colleagues reported that expression of for did in fact increase in the brains of honey bees as they developed into foragers, and manipulating its expression caused bees to forage precociously.

The researchers also found that social factors, in the form of chemical signals called pheromones, induced this "upregulation" of for. Foragers produce a pheromone that signals to the younger bees that there are enough foragers. If the foragers are removed from the hive, some young bees develop into foragers much earlier in life than usual.

Sokolowski's work indicated that for had changed over evolutionary time, producing two varieties of fruit flies that differed in their behavior. Robinson had found that social information altered expression of the same gene over a much shorter timescale – within the lifespan of a honey bee – also changing its behavior.

"An appreciation of the idea that differences in gene expression can occur over vastly different time scales helps understand some of the complex relationships between genes, brain and behavior," Robinson said.

The picture that is emerging from these and other studies suggests that social signals can have a profound effect on when and how genes function.

An organism's genes, its environment, the social information it receives, "all these things interact," said Clayton. "Experience is constantly coming back in to the level of the DNA and twiddling the dials and the knobs."

EMBARGOED FOR RELEASE UNTIL 1 P.M. CST (US) NOVEMBER 6 (THURSDAY)

Social interactions can alter gene expression in the brain, and vice versa 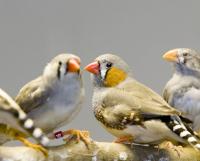