Berkeley -- Pollinators such as bees, birds and bats affect 35 percent of the world's food crop production, increasing the output of 87 of the leading crops worldwide, finds a new study published today (Wednesday, Oct. 25), in the Proceedings of the Royal Society B: Biological Sciences and co-authored by a conservation biologist at the University of California, Berkeley.

The study is the first global estimate of food crop production that is reliant upon animal pollination. It comes one week after a National Research Council (NRC) report detailed the troubling decline in populations of key North American pollinators, which help spread the pollen needed for fertilization of such food crops as fruits, vegetables, nuts, spices and oilseed.

Of particular concern in the NRC report was the decline of the honey bee, a species introduced from Europe and a critical pollinator for California's almond industry. The report pointed out that it takes about 1.4 million colonies of honey bees to pollinate 550,000 acres of this state's almond trees.

In an effort to better understand how dependent crop production is upon pollinators worldwide, an international research team led by Alexandra-Maria Klein, an agroecologist from the University of Goettingen in Germany, conducted an extensive review of scientific studies from 200 countries and for 115 of the leading global crops.

Claire Kremen, an assistant professor at UC Berkeley's Department of Environmental Science, Policy, and Management, is co-author of this new study.

"There's a widely stated phrase in agriculture that you can thank a pollinator for one out of three bites of food you eat," said Kremen, who is also a member of the Committee on Status of Pollinators that produced the NRC report and leader of a group at the National Center for Ecological and Analysis and Synthesis that co-sponsored the work. "However, it wasn't clear where that calculation came from, so we set out to do a more thorough and reproducible estimate, and we wanted to look at the impact on a global scale."

What the researchers found fell in line with the dictum to which Kremen referred. Out of the 115 crops studied, 87 depend to some degree upon animal pollination, accounting for one-third of crop production globally. Of those crops, 13 are entirely reliant upon animal pollinators, 30 are greatly dependent and 27 are moderately dependent.

The crops that did not rely upon animal pollination were mainly staple crops such as wheat, corn and rice.

The NRC report notes that honey bees in North America have been decimated by infestations of parasitic mites that were inadvertently introduced to the United States. In addition, honey bees are battling antibiotic-resistant pathogens and competition from Africanized honey bees.

Kremen added that honey bees, particularly ones in the wild versus those in managed hives, are negatively impacted by habitat loss and a variety of non-sustainable farming practices. These impacts also affect native species of wild bees. There are 4,000 species of native bees in North America alone.

"We've replaced pollination services formerly provided by diverse groups of wild bees with domesticated honey bees," said Kremen, who recently co-authored another study showing that wild bees interacting with honey bees can lead to a five-fold increase in pollination efficiency. "The problem is, if we don't protect the wild pollinators, we don't have a backup plan."

Kremen suggested an approach to a more sustainable form of agriculture, one that de-emphasizes the use of synthetic fertilizers and builds in more of a reliance on natural ecosystems.

Some changes may involve mere tweaks to current practices, such as allowing weeds and native plants to grow and prosper along the border of the primary crop, she said. Such non-crop plants, which are currently killed off by herbicides, can sustain a variety of wild bee species when the primary crops are not in bloom.

Another change could be to switch from flood irrigation, which drowns bee species that nest in the ground, to spray irrigation when feasible, said Kremen.

The study in the Proceedings of the Royal Society B highlights what is at stake if steps to improve pollinator biodiversity are not taken.

"Passion fruits in Brazil are hand-pollinated through expensive day-laborers as the natural pollinators, carpenter bees, are hardly available because of high insecticide use in the agricultural fields and the destruction of the natural habitats," said lead author Klein.

Klein said that in the cities of Brazil, the high prices for fruits and vegetables are pushing people to turn to less healthy alternatives, including fatty meats and sugar products. As a result, she said, obesity rates seem to be rising.

This study was also supported by the Sixth European Union Framework program. 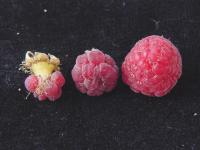