Skin cells taken from patients with a rare genetic disorder are up to ten times more sensitive to damage from ultraviolet A (AVA) radiation in laboratory tests, than those from a healthy population, according to new research from the University of Bath.

It is hoped that the work, which has involved designing a brand new molecule with potential to be added to sun cream, could benefit those with Friedrich's Ataxia (FA), as well as those with other disorders characterised by mitochondrial iron overload, notably Wolfram Syndrome and Parkinson's disease, where UVA rays from the sun may pose particular challenges.

Although most sun creams are effective against UVB rays, generally they only protect against UVA rays through the reflective properties of the cream alone. When cells are exposed to UVA rays, the damage caused to cells can be worsened by excess free iron in mitochondria which fuels the generation of 'free radicals', including Reactive Oxygen Species (ROS), which can damage DNA, protein and fats - increasing the risk of cell death and cancer.

Patients with FA have high levels of free iron in their mitochondria. This new research, led by scientists at the University of Bath, King's College London and Brunel University London shows that this excess free iron makes skin cells from these patients up to 10 times more susceptible to UVA damage.

The scientists have custom-built a molecule which acts like a claw to scoop up excess iron particles within mitochondria, preventing them from amplifying UVA-induced damage. The researchers' goal is to see this molecule added to sun creams to enhance their protective effect against UVA rays.

In a series of in vitro experiments using human skin cells called fibroblasts from FA patients, the researchers demonstrated that their claw - termed an 'iron chelator' - reduced damage to mitochondria membranes from realistic doses of UVA rays by a factor of two. In cells pre-treated with the chelator, UVA-mediated cell death was prevented. The chelator is cleverly designed so that it travels to the mitochondria specifically.

Dr Charareh Pourzand, from the Department of Pharmacy and Pharmacology at the University of Bath, said: "A major function of mitochondria is to produce energy, and iron in the right amount is essential for their function.

Unfortunately because mitochondria are so crucial as the main source of energy, when something goes wrong with them, the consequences can be severe. Mitochondria dysfunction lies at the heart of a growing number of diseases.

"Friedreich's Ataxia is one example of a disease of 'mitochondrial iron overload'. Our results -should they translate to people's skin (in vivo), suggest that patients could be up to 10 times more sensitive to UVA. The damage you and I would get in our skin from for example 2.5 hours' exposure to solar UVA would be 4-10 times higher for a patient with FRDA.

"We're interested in the biology of iron and how it impacts humans and disease. One of our goals is ultimately to develop new therapies to protect from the sun. Our research shows that adding an iron chelator to sun creams could enhance the photoprotective capability of current preparations and be particularly beneficial to people with acute sensitivity to solar UVA.

"We hope that our findings can be ultimately translated to the people to give them a better quality of life, and that we can inspire other researchers to follow those avenues. We are very thankful to our sponsor the Biotechnology and Biological Sciences Research Council (BBSRC) to have made this project feasible."

The team is now looking to continue the research into the chelator with an in vivo mouse model of the disease.

Friedreich's Ataxia (FA) is a genetic disease characterised by the progressive degeneration of the cells of the nervous system and of the heart. FA has a prevalence of around 1/29,000 in Caucasian populations, and 1/20,000 in south-western Europe. Patients often have to use wheelchairs from a young age and frequently die in early adulthood.

The role of mitochondrial labile iron in Friedreich's ataxia skin fibroblasts sensitivity to ultraviolet A is published in Metallomics, DOI: 10.1039/c8mt00257f

The research was funded by the Biotechnology and Biological Sciences Research Council (BBSRC). 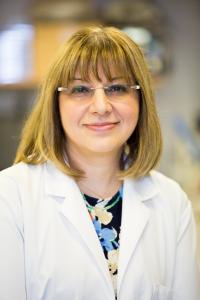