In a groundbreaking new study, researchers at the University of Minnesota, in collaboration with the U.S. Army Combat Capabilities Development Command Soldier Center, have 3D printed unique fluid channels at the micron scale that could automate production of diagnostics, sensors, and assays used for a variety of medical tests and other applications.

The team is the first to 3D print these structures on a curved surface, providing the initial step for someday printing them directly on the skin for real-time sensing of bodily fluids. The research is published in Science Advances, a peer-reviewed scientific journal published by the American Association for the Advancement of Science (AAAS).

Microfluidics is a rapidly growing field involving the control of fluid flows at the micron scale (one millionth of a meter). Microfluidics are used in a wide range of application areas including environmental sensing, medical diagnostics (such as COVID-19 and cancer), pregnancy testing, drug screening and delivery, and other biological assays.

The global microfluidics market value is currently estimated in the billions of dollars. Microfluidic devices are typically fabricated in a controlled-environment cleanroom using a complex, multi-step technique called photolithography. The fabrication process involves a silicone liquid that is flowed over a patterned surface and then cured so that the patterns form channels in the solidified silicone slab.

In this new study, the microfluidic channels are created in a single step using 3D printing. The team used a custom-built 3D printer to directly print the microfluidic channels on a surface in an open lab environment. The channels are about 300 microns in diameter--about three times the size of a human hair (one one-hundredth of an inch). The team showed that the fluid flow through the channels could be controlled, pumped, and re-directed using a series of valves.

Printing these microfluidic channels outside of a cleanroom setting could provide for robotic-based automation and portability in producing these devices. For the first time, the researchers were also able to print microfluidics directly onto a curved surface. In addition, they integrated them with electronic sensors for lab-on-a-chip sensing capabilities.

"This new effort opens up numerous future possibilities for microfluidic devices," said Michael McAlpine, a University of Minnesota mechanical engineering professor and senior researcher on the study. "Being able to 3D print these devices without a cleanroom means that diagnostic tools could be printed by a doctor right in their office or printed remotely by soldiers in the field."

But McAlpine said the future is even more compelling.

"Being able to print on a curved surface also opens up many new possibilities and uses for the devices, including printing microfluidics directly on the skin for real-time sensing of bodily fluids and functions," said McAlpine, who holds the Kuhrmeyer Family Chair Professorship in the Department of Mechanical Engineering.

The research was funded primarily by the U.S. Army Research Office via the Soldier Center, the National Institute of Health's National Institute of Biomedical Imaging and Bioengineering, and the Minnesota Discovery, Research, and InnoVation Economy (MnDRIVE) Initiative through the State of Minnesota. Portions of this work were conducted in the Minnesota Nano Center, which is supported by the National Science Foundation through the National Nanotechnology Coordinated Infrastructure (NNCI) Network. 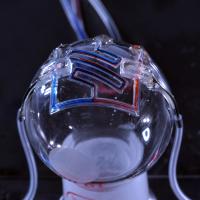