A team of University of Cincinnati researchers had to go deep to uncover brand new knowledge that they say will "shake up" the archaeological field in the southwestern United States.

Various salt compounds found deep in the soil of New Mexico's desert may be the key to understanding how crops were cultivated in ancient Chaco Canyon -- despite the backdrop of what seems an otherwise arid and desolate landscape, according to a University of Cincinnati study.

Prior studies on the canyon's environment suggest that water management techniques used by the Ancestral Puebloans during periods of drought eventually resulted in toxic levels of salinity (salt) in the water. This left scientists doubting any viability of the soil for growing corn, which they believe eventually led to the abandonment of the Chaco culture.

But recent research at the University of Cincinnati finds the contrary is true.

In fact, the researchers found that together with volcanic minerals already indigenous to the area, the calcium sulfate mixture actually increased the soil's fertility for cultivating maize. This find, they say reveals further evidence for the development and maintenance of a thriving agricultural urban center.

"One thing we can say with a great degree of certainty -- the Ancestral Puebloans did not abandon Chaco Canyon because of salt pollution," says Kenneth Barnett Tankersley, UC associate professor of anthropology and geology. "Previous investigations of this area only looked at surface soil samples and found what they thought were toxic levels of salt, but the studies lacked an in-depth chemical analysis of the type of salt found in the water and soil and an anthropological look at how the culture lived."

By investigating modern Puebloan culture as well as looking at the geological environment, the researchers used a holistic approach to investigate how the culture flourished. Analyzing 1,000-year-old sediment, water and salt compounds and examining the water management technology of early Chaco Canyon dwellers led the research to conclusions that Tankersley described as remarkable.

All salts are not created equal

"What we have found regarding water management, salt issues and salt contamination will shake up southwestern archaeology anywhere in the world for any era," Tankersley contends. "Harsh salts such as chloride minerals can indeed be deleterious to plants such as maize, however, not all salts are chlorides, and not all salts are harmful to plants."

The UC interdisciplinary team of faculty and graduate students from the departments of geology, anthropology and geography published the conclusions and details of the study this month in the Journal of Archaeological Science titled, "Evaluating soil salinity and water management in Chaco Canyon, New Mexico."

In contrast to earlier studies that suggested the salts were toxic, the researchers exhumed samples from deeper in the earth and found that salts in the canyon's water and soil from 1,000 years ago were instead non-deleterious sulfate minerals.

Looking back, according to the researchers, Ancestral Puebloans flourished in this area from the ninth to 12th centuries in the arid, yet fertile land they referred to as an oasis. But during this time the Puebloans suffered severe droughts in the canyon on several occasions, leaving them searching for other ways to manage water.

Described by Tankersley as an unprecedented structural endeavor by pre-Columbian Native Americans, Chaco Canyon is characterized by the construction of monumental great houses and ceremonial Kivas surrounded by mountain chains dotting the horizon.

He describes them as multistory, planned structures comprised of millions of pieces of dressed sandstone and thousands of roof beams -- some functioning as residences and others as sacred and ceremonial centers.

"The settlement was surrounded by mountains, which would provide water in the spring after the snow melted," says Tankersley. "During the rainy season when floodwaters hit, the Puebloans would capture runoff water from small canyons known as the Rincons and local arroyos (periodic streams) such as Chaco Wash and the Escavada Wash.

"This process helped the water gather essential minerals along the way providing a rich fertilizer and an efficient irrigation system."

Moreover, the researchers found evidence for water from ponds and puddles collected in ceramic jars during periods of drought, which the Puebloans stacked and stored in thickly walled rooms inside the great houses.

Tankersley explains this as an efficient way to keep the water at a constant cool temperature for drinking during dry periods.

Not only were these early denizens ahead of their time for such sophisticated infrastructure in these early mesa lands, but Tankersley describes the Ancestral Puebloans as master artisans who loved color.

"Among our research we also found evidence for sulfates being used as a base for paint pigments," says Tankersley. "We already know that sulfate mineral salts were among the most important and sacred raw materials of past and present Puebloan cultures. They even influenced the selection of Pueblo sites such as the Santa Domingo Pueblo, chosen because of its close proximity to a deposit of calcium sulfate referred to as gypsum.

"When ground up and mixed with water, gypsum created a whitewash to paint the inside and outside of their homes."

After uncovering a range of decorated crafts, ceramics and refined stone artifacts, he says scientists have unearthed strong evidence for amalgams made of sulfate gypsum and other local minerals to create a variety of pigments to decorate objects and paint murals on walls.

Many of their painted designs were stylized birds, deer, snakes, goats and ceremonial designs in story-form pictographs -- illustrations Tankersley describes as the earliest known form of writing.

One of the most valuable resources the researchers had while combing through the desert was the friendships they built with the Puebloans and Navajo who still live in the immediate vicinity of the canyon, Tankersley said.

"The first president of our flagship organization, the Society for American Archaeology, was a Native American and since then somehow archaeologists got away from talking to indigenous people," says Tankersley. "This brings back what we call ethnoarchaeology -- comparing past human livelihoods with those of the modern direct descendants.

"When compared to what their ancestors did, the great thing about the Puebloans is that they have a high degree of cultural continuity."

Further dialogue with the Native Americans helped shed light on how corn grown in different regions was found among the local samples the researchers investigated. Comparing the chemical isotope signatures in various corncobs to the same chemical signature in water from the areas outside Chaco Canyon, the researchers found specimens from sites as far as 300 km away.

"We explain this movement of maize into Chaco Canyon from significant distances away in terms of 'kinship mobility,'" says Tankersley. "This is the distance goods and services, ceremonial or economic, moved between extended families."

He further describes Ancestral Puebloans as a sharing culture -- families gathering over great distances to share produce, exchange wares and participate in seasonal feasts and celebrations.

Understanding human behavior and culture is something the researchers value as much as analyzing the chemical and geological environment and Tankersley says that without this holistic approach much of research is left unsolved or misguided, in his opinion.

While the focus of this research was on Chaco Canyon, the researchers found the conclusions for water management systems and kinship mobility relevant to modern urban centers built in arid environments anywhere and anytime in the world.

Furthermore, the theory -- that Ancestral Puebloan water management systems built in Chaco Canyon, New Mexico, had led to catastrophic salt pollution and ultimately the abandonment of the area -- can no longer be supported, the researchers contend.

Funding for this project was provided through the University of Cincinnati Research Council, The Charles Phelps Taft Foundation and the Court Family Foundation. The Dean of the College and Graduate School of Arts and Sciences of the University of Virginia provided additional funding.

The Department of Geology at the University of Cincinnati is a nationally ranked program with high-caliber faculty and a strong research reputation. UC's graduate and undergraduate programs are supported by faculty who perform high-caliber research with reputations that span world-wide. UC faculty teach and conduct research in many areas of the geosciences including paleontology, Quaternary geology, geomorphology, sedimentology, stratigraphy, tectonics, environmental geology, and biogeochemistry. 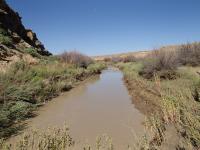 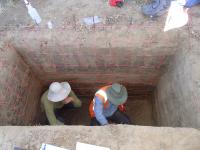